The day started well. Before doing the 9.00 a.m. Skype chat with my Australian friend I hd already been into town to buy bread and milk. After the call I did a load of laundry and made a pot of soup that will do couple of lunches.

The afternoon was also successful, but felt more of a struggle. My computer has been running rather slow recently, so I attempted to improve matters. I emptied 6971 files out of the recycle bin and started uninstalling programs that I'm no longer using. Because the computer was running slow, this took rather a long time. I also had to consult my husband about which ones related to the courses we taught a few years ago and which are now surplus to requirements. The process involved a few restarts and there are still a few more programs I can get rid of, but it was time for dinner, so I stopped.

When I nipped into town this morning, I noticed this shop window.

If you're thinking this romantic window is a little early for Valentines Day, it's because in Wales we celebrate Dydd Santes Dwynwen on 25 January. 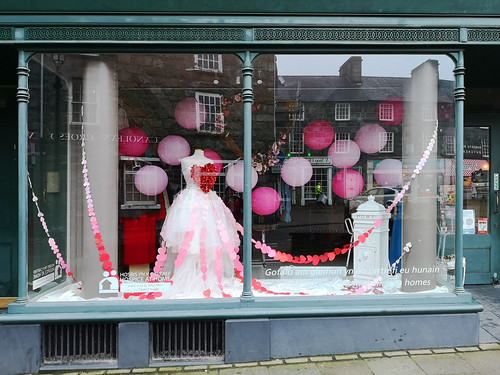 A couple of times a week my husband likes to do a long walk. Usually he walks along the old railway to the coast and then gets the bus back, but today he suggested that I drive out to join him and we have a pub lunch in Barmouth. It was very enjoyable and made a nice change. I snapped this shot while we waiting for the food to arrive. The pint of lager was G's, I was driving so had a fruit juice. I wouldn't want to do this too often because I'm not used to a big meal in the middle of the day, but it's nice for an occasional treat. 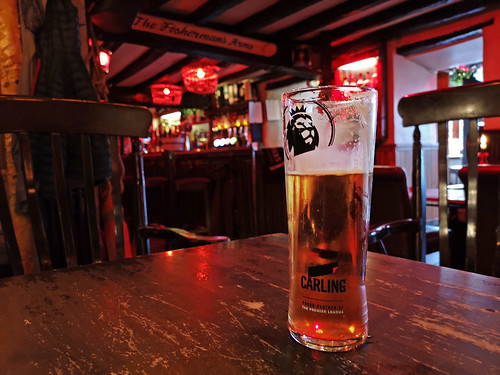 I bought these a few years ago, played with them for a while then put them in a drawer and forgot about them. I found them again yesterday and I've started using them to improvise silly little stories in Welsh.

They are great fun and can be used for story telling in any language. 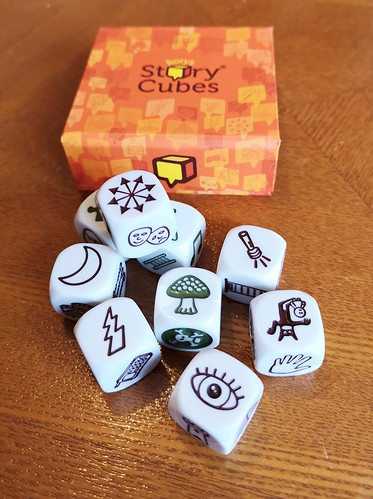 I have two sets and a mini-set of 3 cubes which are "Clues".

The reason I've started using them now is to help improve my Welsh improvisation skills. If I want to be able to talk naturally to the camera for my videos, I have to be much better at speaking extempore. Conversations are fine because you have the other person prompting you, but just speaking about what you can see around you and commenting on it is much harder. I don't want to start totally memorising scripts, but I also need some sort of structure to avoid vague waffling.

It was cold again overnight, but that meant a lovely sunny winter morning to follow. This is part of the grounds of the local FE college. Before it was a college, it was a girls' grammar school, dating back to 1876. There are more grounds on the other side of the road, which is one of the main routes into town. A bridge was built to enable the pupils to cross safely without being in any danger from the traffic. The bridge is no longer used because it's become unsafe. 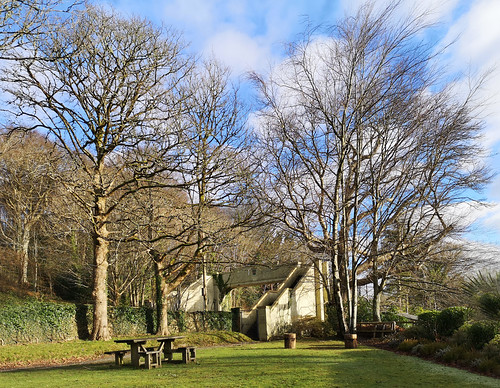 An interesting thing I learned during the guided walk around town on Saturday was that back in the 1860s, there was some money available to the town. There were two suggested projects. The first was to restore the old building that was said to be a court house used by Owain Glyndwr and the other project was to build a school for girls. There was already a grammar school for boys, but no provision for older girls. The town held a referendum and the school won. It closed in the 1960s, replaced by a co-ed comprehensive secondary school and, eventually, the building became the FE college.

Today was Sunday and a Quaker meeting day. I needed to get there early to set up the room. I thought I had plenty of time but had not realised quite how cold it had been overnight. The car was thoroughly frosted over and the can of de-icer spray was almost empty. However, I started up the car and sprayed and scraped and managed to clear the windows and mirrors enough to drive safely and I did arrive just in time. The car park by the village hall was bathed in sunshine, so as there wasn't anyone else there, I parked parallel to the fence rather than at right angles so the car would have maximum sun on it during meeting.

As it turned out, there was only one other person there. I think it's time for some serious decision making regarding the future of our meeting. After 50 years of meeting in someone's house, our local meeting moved to a village hall. This was mainly because M's husband had died and she is now elderly. We had become concerned that her address was public because it was the meeting venue. Also M's mobility had declined considerably and if she became too infirm, the meeting might have to move suddenly. It was also thought that we'd attract new members if we were more visible.

At first the plan seemed to be working. We gained 3 new members quite quickly, but then the most energetic and enthusiastic new member moved away to take up a new job and two old members stopped coming, so we were back to the number we started with. I think we need to take some hard decisions in the near future.

Meanwhile, I am still taking photos and they're still pretty much desperation shots. I snapped this sunlit tree in the corner of the car park just before I drove home after meeting. Rather more green than one might expect for two-thirds of the way through January. I think that's a holly in the background and lots of ivy climbing up the tree. 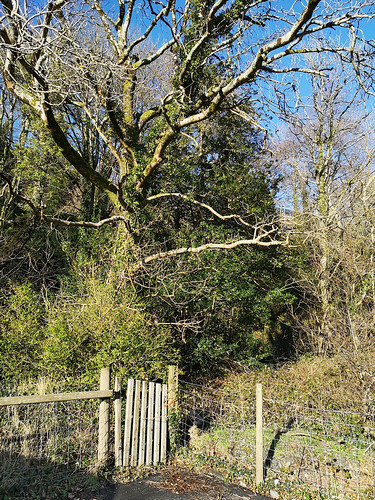 Today the Say Something in Welsh Day Out was in Dolgellau. We had a great day: an informal talk with Bethan Gwanas a local author; a walk around town with a local historian; lunch in the Sospan restaurant; and a visit to Gwin Dylanwad and a guided tour of the building.

The square is not usually this quiet. It's normally filled with buses and cars, so I was lucky to get this shot. 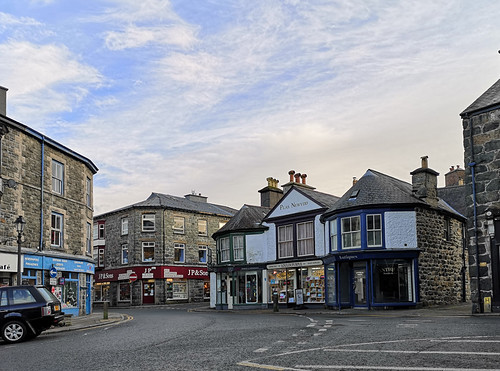 This took a bit of thought because there are things I refused to eat as a child, like fatty meat, that I still can't/won't eat now. Also things I hated as a child like parsnips and mushrooms that I now enjoy in small quantities, but don't exactly love. So I think it has to be onions.

I remember my brother and I wouldn't eat any trace of onion so my poor mother would put them in whole to flavour the stew and then try to fish them out without leaving any bits behind. Now I use them in just about every savoury dish. I also like them raw, but they no longer like me and upset my digestive tract, so I can only eat a very tiny quantity.

As to things I loved as a child and find horrible now, probably candy floss and raw cake mixture scraped from the mixing bowl. My brother and I used to fight to be the one to lick the mixing spoons and eat the last bits of mixture.

Today was much colder. This is the first time I've noticed snow on the nearby mountain. Not even a flake of snow down here though and it's supposed to be dry tomorrow, which wil make a nice change. 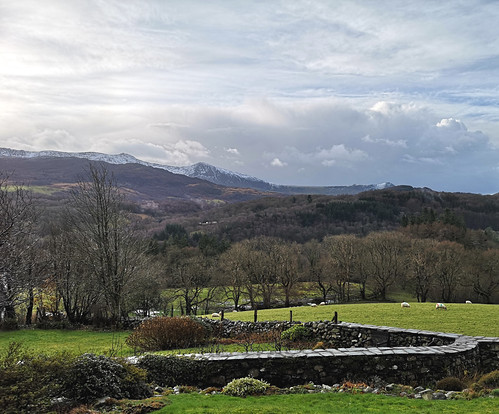 I feel really tired today. Not sure why. Perhaps it's because I woke in the night around 4.00 a.m. and took ages to get back to sleep?

I had planned to walk up to see my elderly friend, but got sucked into reading Twitter and left it too late, so I drove instead. This wasn't entirely a bad thing because I did need to do a big food shop. I'd been getting by by walking in to the Co-op, but even using the trolley, I can't manage bulky items like toilet rolls.

It's a while since I read Julie Morgenstern's Organising from the Inside Out but one thing I do remember from that book (or possibly from her time management book, which I don't have any more) is that sometimes the subconscious mind knows that a task will take much longer than the conscious mind is claiming. I've often found this to be true, and the latest example is editing the video I shot a couple of weeks now. I had decided it would be nice to have it finished and uploaded by Saturday when there's a Say Something in Welsh meeting in town. I thought, "Wouldn't it be nice to casually say, I have a new video up."

But conscious mind was being wildly optimistic. Subconscious mind knew this, but couldn't get a message up to conscious mind to tell it not to be silly. When this happens, it always leads to procrastination and I hadn't worked on the editing for days.

Anyway, today I realised the tricks my mind was playing on itself, accepted that there's no way the editing will be done by Saturday, told myself to just do half an hour on it and thus managed to unstick the project. It didn't take all that long to produce an outline of the script for the voice over and having worked out what I want to say, I can now get some actual script written tomorrow and carry on working on it over the weekend.

I haven't been out with the DSLR yet this year. The weather has been just terrible and the few decent days have occurred when I had to do other things. Here's hoping for some dry days before too long.

I've used the photo to make a new LJ icon for photography. The one I have used for many years was a picture of the Canon PowerShot which has now been replaced by the new Canon M50. Actually, all the photos so far this year (including this one) have been taken with my phone, but I chose the Huawei because it was supposed to have a good camera and it's handy and always with me if I'm out. 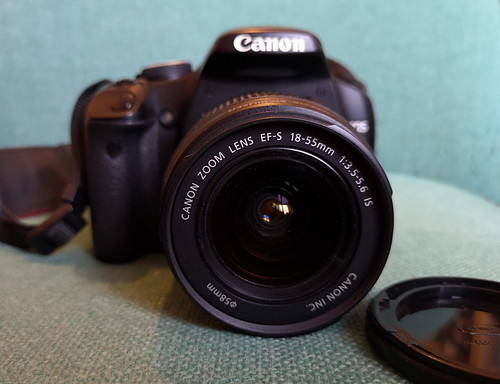 I'm in a small Facebook group that is reading a book about charity and then discussing it. Today I quickly made notes as I re-read Chapter 1.

I can't remember where I got the pretty notepaper. I certainly didn't buy it. I have a vague memory of acquiring it when we cleared my Dad's house. Anyway, it's not my normal thing, but I put the pad beside the phone and I grab a sheet if I want to make notes. 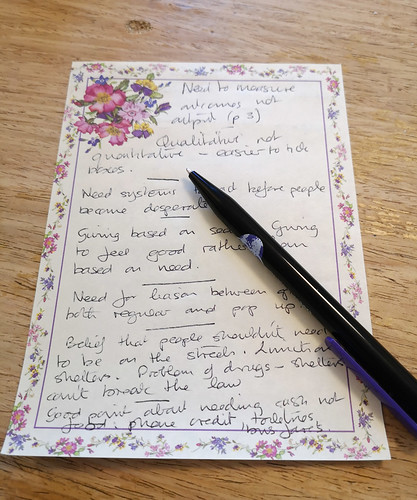 Other things done today: The usual Wednesday morning Welsh language chat. There were 7 of us there, not including Misty the dog. After that I walked through to the Co-op to replenish our food supplies. It seems silly to drive the short distance to the supermarket, but if I walk I can't carry very much. However, today I decided to use the shopping trolley, which confirms my little old lady status, but means that I can trundle more food home without pulling my arms out of my sockets or using the car unnecessarily.
Collapse