I had thought about going for a run this morning, but it's been pouring with rain and though it's now stopped, it's bloody cold out there. I will settle for a walk later.

Otherwise I've done a few random useful things such as sorting out my anti-virus software which was about to expire and moving the paper for recycling from the conservatory into the garage for the collection on Wednesday. I've also pulled all the stuff out from the top shelf of the big kitchen cupboard. Have managed to force myself to throw away the Nice Paper Carrier Bags/Big Gift Bags. This sort of thing is the bane of my life because it triggers the, "Oh, that might come in useful/That's too nice to throw away," response.

I've also moved the Caithness glass lamp base into the garage. This was a wedding present and has never been used in the 34 years we've been married. Ever the optimist, I still think I may get a lamp fitting and a shade for it one day. Or perhaps I could get some decorative twiggy things and just use it as a vase?

All this moving stuff about is in an attempt to find space to store a few homeless items that just float about the kitchen and conservatory and make them look messy.

Off to put the stuff back into the cupboard so we can have the kitchen table to eat lunch off.

The story ideas are slowly glooping up from the depths of the unconscious, like porridge just coming up to the boil. Still no more scenes for the brand new novel, so I haven't started writing that yet. But I do have a complete short story idea, so I think I'll try writing that and see where it takes me. The idea has been hanging around for a few days now, but I woke up this morning knowing the ending. Without that, I didn't want to start it. I have enough unfinished stories already.

In addition to the bit of writing and baking a loaf of bread[1] I progressed the decluttering of the conservatory, did a load of washing and went for a 1 mile run. Managed to run all the way out without stopping, then after a moment to catch my breath, ran all the way back again. Though I can't run anywhere near as fast as I could in my youth, I can now run further. I never managed a mile when I was still at school. The difference seems to be that I have learned to pace myself. :)

[1] OK, I use the bread machine, but it still feels strangely satisfying somehow. :)

I probably wouldn't have taken any photos today as the weather wasn't good, but I'm in a Flickr group where you post a photo a week about what you've been doing, so I grabbed my camera and took these. ( Collapse )

But the one I actually posted to the group was this one...

Raindrops on the conservatory window. 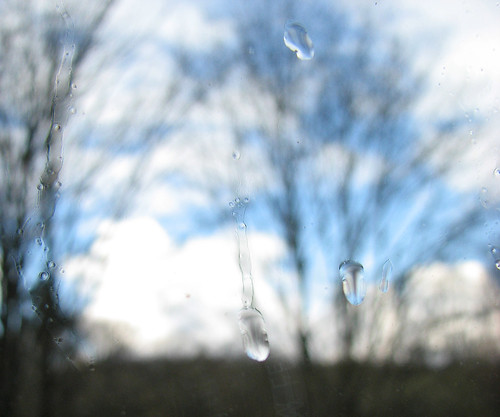