I learned this because I ate too many sandwiches and cakes at the college's Prize Day last Thursday. (Bear with me, the connection will be explained!)

This week has been a busy week. It's officially the end of term for full-time students, but I actually have a few classes running on into next week. But on Thursday, we had Prize Day. This is quite a grand affair -- even if it is held in the sports hall, which is little more than a glorified barn.

All staff have to dress up and wear their name badges. Students are on their best behaviour and this year they even made the agri and engineering lads wear shirts and ties! In previous years they've just worn rugby shirts and jeans. The girls from the hair and beauty department in Wrexham, however, always dress up as though they're attending the Oscars, in slinky dresses, high heels, lots of make-up and trendy hair dos. :)

But the refreshments -- which are the best bit and a reward for clapping politely through all the speeches and presentations -- are outside, garden party style if the weather permits, otherwise they're indoors in the student hostel dining room. This year the weather did not permit, so it was rather cramped indoors. But we had a good feed on sandwiches of all kinds, pork pies, sausage rolls, vol-au-vents, cakes and strawberries and cream.

I did one pass through the dining hall and Val and I took our plates to a side room to devour our spoils. Neither Val nor I fancied the scrummage around the tea counter, so she toddled off home to have a cuppa there while I did another swift pass through the very crammed dining hall, snaffling another meringue (with whipped cream and a strawberry) and a chocolate Éclair en route. I consumed the cakes and a cup of tea at my desk whilst preparing the stuff I needed for the lesson the next morning.

Of course when I got home, I wasn't hungry, so I didn't eat the moussaka ready meal that I'd bought to eat that evening.

Next day, ie yesterday, we had Val's leaving do at the Three Pigeons Inn. 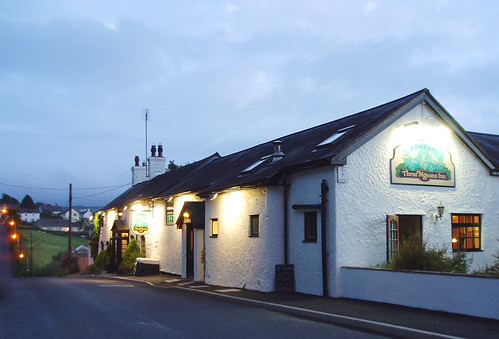 Great fun was had. Val had lots of presents and our Vice Principal had written a poem describing Val's exploits during the 20 years she has worked for the college.

Now, while I was merrily tucking in to starter, battered cod and chunky home made chips with mushy peas followed by strawberry cheesecake, G had been left at home with the choice of a frozen pizza or a chilled moussaka.

He'd never eaten moussaka before and to be honest, I didn't think he liked aubergine (egg plant), but for some reason he decided to eat the novel dish and also, for some unknown reason, he Googled on aubergines and discovered that they contained nicotine.

However, if you are fond of aubergine (egg plant) then you don't need to worry. They don't contain much nicotine and are very unlikely to be addictive. :)

"Therefore, 20lbs of eggplant, on average, would contain about the amount of nicotine in an average cigarette."

I really don't think anyone could manage to eat 20lbs of aubergine (egg plant)!
Collapse