Well, you already know most of it. (Though having said that, I did write a long post on the Eee that I haven't yet managed to post because I couldn't connect via our daughter's wireless broadband. Must remember to do that tomorrow.) 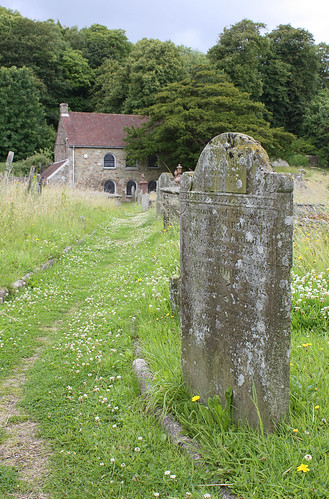 First experiments with the new camera. The weather wasn't very cooperative, but Margam Abbey is a very pleasant spot. Shot of the graveyard with the ancient stone museum in the background.

I ate the first two home grown tomatoes yesterday. Here they are just before I harvested them. :) 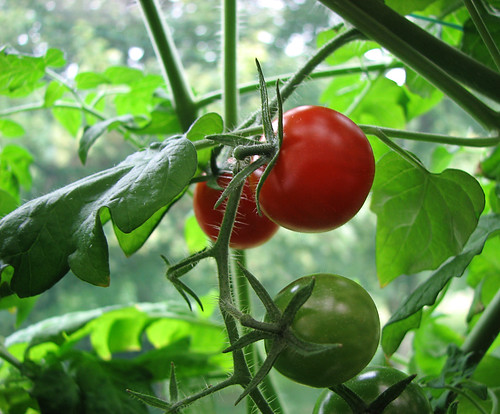 They're sweet cherry tomatoes, so they're only small, but they were delicious.

It looks like I'll have to wait another week or so before the next ones are ready, but there are plenty more at all stages from flowers to tiny weeny green tomatoes the size of a pea.


Point reached on journey: Second night out of Rivendell, travelling through empty country which is rough and barren. We have almost reached the hollow where we'll camp during the day.

Just a quick cycle ride down the old railway and back. I was delighted to discover that the plantaris muscle is not involved at all in the cycling action, though I had to be careful dismounting and was a bit limpy every time I had to walk the cycle through the special cycle gates that occur every so often. But it was bliss to be able to tootle along at a normal pace. I hadn't quite realised how frustrating it's been hobbling carefully around until wheeeee! I wasn't confined to a hobble any more.

Being a Sunday afternoon, and the first dry sunny day we've had for eons, the route was quite busy so I had to negotiate walkers who straggle across the path and -- despite it clearly being a cycle track -- are completely oblivious to anyone possibly coming up behind on a bike. I startled one woman as I rode past, and that was despite deliberately making scrunchy noises on the gravel and tingling the bell to warn her. I actually thought she'd heard, but from the way she jumped, it seemed not. And she wasn't deaf either as she was nattering to her companion.

So it looks like I'll have to do quite a bit of cycling if I want any exercise over the next few weeks. The leg is steadily improving and I can go downstairs more or less normally now, albeit in a slightly hoppity manner because the poorly leg doesn't want to flex in the way it needs to to descend smoothly, but I don't think it would do it good to walk more than about a mile at a very gentle pace and the plantaris muscle is definitely involved in stabilising the leg and foot on uneven ground, so I'd been limited to smooth surfaces for at least another 3-4 weeks.

It's strange how good can come from mishaps. As I know I'll get bored cycling the same stretch over and over again, I have finally assembled the bike carrier for the car. This was a Christmas present from my daughter and I've had it for years, but just never got around to sorting out the bits and putting it together. It did take a bit of puzzling out, but the plan is to try it out tomorrow. As long as I can attach it to the car OK, it will extend my range and the variety of possible rides tremendously.
Collapse