Nothing much happened on days #8 and #9 (we did go out on day #7, but I'll write that up tomorrow and backdate). Today though was the Flickr meet for the WelshFlickrCymru group (North Wales contingent).

I've actually been feeling a little guilty because I know a few of you were enticed to my LJ by the promise of photos and what with the sprained leg muscle and the bad weather, I've not been able to play around with my new camera. However, at last the leg is OK and there was a WFC Flickr meet within reasonable driving distance, so I toddled along.

WFC are a very friendly bunch. I'd met some before at the Barmouth meet, but the better weather had tempted more out today. The meet started at 12:00 noon, but I managed to arrive half an hour early by a) allowing extra time for slow holiday traffic and b) allowing extra time for getting lost. In fact the traffic wasn't too bad and the mine was well signposted, so I drove straight there without going astray once. Of course it did help that I knew the main road and the approximate place where I had to turn, but it was further up the little lane than I'd thought so the signage was appreciated.

After the awful rain yesterday, it was lovely to see some sun, though it did mean that most of the photos turned out a bit picture postcardy. Here are the best of the bunch showing the actual mine.

I thought this one would suit an old photo look. 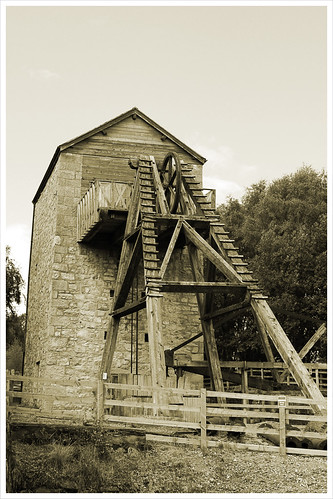 All in all a useful and enjoyable day. I've had chance to get to know the new Canon 450D a bit better. (Only 1 photo was badly focused.) I do feel I've taken a bit of a step back, but once I've got the feel of it by taking a bunch of safe and conventional pictures, I'll feel confident enough to try more challenging stuff again.

Will post more pictures tomorrow, but now it's time to make dinner and harvest some tomatoes to go with my salad. They're developing nicely at a steady 4 or 5 per day, which is just the right number for me. 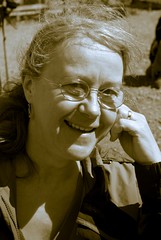