Point reached on journey: Just reached a small stream and started to follow it west.

Yesterday I got plenty of exercise. As it was fine in the morning, I hauled the cardboard boxes down to the bit of wasteland beyond our garden to have a bonfire. Before I could do this, I had to hack down the Himalayan balsam that had sprung up again since I hacked it down previously. In the process of re-clearing my bonfire area and the overgrown bottom bit of our garden, I discovered that we have a nice crop of blackberries coming along. So I left the brambles where they were. I will clear them over the winter when they've finished fruiting. No point in wasting perfectly good fruit. :)

I successfully burned the boxes and the scrap wood left over from the bathroom makeover and the old door. It then rained on an off all afternoon, but I did manage a short walk up the bridleway and round the road back to town, thus arriving at the Co-op by a very roundabout route.

Then this morning I realised that I'd perhaps slightly overdone things as the sprained leg was aching a bit, so instead of going for a walk, we went for a trip on a steam railway. (see next post for details and pictures)

Though the forecast had said it would be overcast all day, the weather actually turned out quite nice. There were cloudy spells, but we had sunshine which was very welcome as I'd had to start using the lightbox again. Though I didn't need it this morning. I was about to switch it on when I realised that it was sunny outside. Hmmm, I thought, if only the conservatory wasn't in such a muddle, I could have breakfast out here. I then put my head outside and realised that it was pleasantly warm. I decided to have breakfast outside on the picnic table.

Which was how i came to notice the rabbit...

It's the one from two doors along and he seems to like our garden. I didn't even try to catch him this time and even photographing him proved difficult. 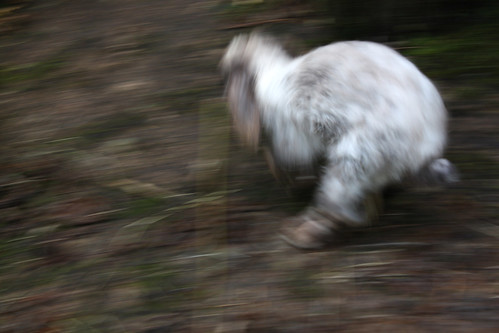 But when he settled down again, I managed to snap him with the longer lens... 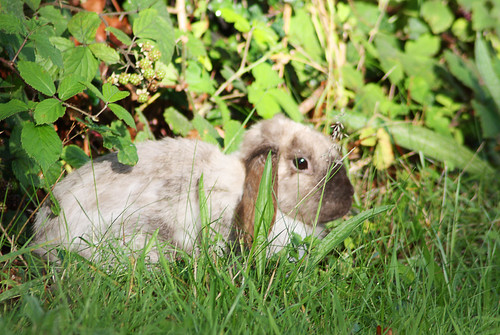 The bunny was still frolicking around our garden this evening. I do hope he'll be OK. The owners don't seem concerned that he's missing. At least he's not going to starve!

As I said in my last post, I felt the leg needed a rest today so I'd planned to drive somewhere and just play at being a tourist for the day. I'd decided on Porthmadog and Cricieth Castle, but then G decided he wanted to go out too and as he's not really into castles, we settled on a steam train instead. 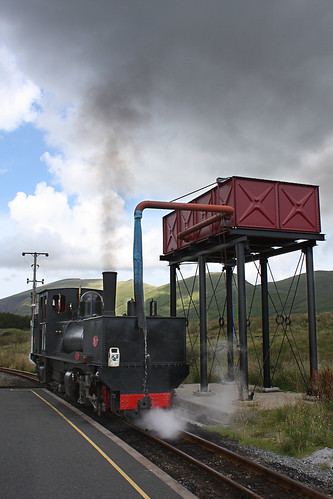 This is one of the engines on the Welsh Highland Railway, the newest of the restored narrow gauge railways in Wales. Eventually it will run all the way from Caernarfon to Porthmadog. We started at the half way point at Waun Fawr and travelled to the terminus at Rhyd Ddu.