Everyone is saying that this year's X Factor winner, Alexandra, will romp away with the Christmas number 1 singing... wait for it... Leonard Cohen's "Hallelujah".

Does Simon Cowell have any idea what that song's about? [Edited to correct name.]

Has he actually listened to the words?

Really? I don't think so.

It's not that Alexandra is a bad singer and I'm sure that there have been worse versions, but despite the chorus (which is what possibly misled Cowell?), the song is not a gospel song and is not at all Christmassy. Hallelujah is a poignant, slightly bitter yet beautiful song about love and sex and the at times fraught relationship between men and women.

Alexandra's version manages to lose all that and though she performs it perfectly competently, she actually manages to make the song bland.

I have to admit, that she's not the sort of singer I go for, but just belting something out doesn't make it emotional or moving. Sorry.

But taking the line that all publicity is good publicity, the choice seems to have resurrected interest in the better versions. Many of the reviews in iTunes were recommending people to download Jeff Buckley's version instead and as I type this, he's at number 4 on the iTunes download chart.

And also the king himself, Leonard Cohen is currently showing at number 47!

Of course not everyone is taking it so seriously. It didn't take long for Dave and Dom off the Chris Moyles show to produce a (IMHO) very funny parody about a missing lamb bhuna.

To be honest, I think Dave manages to convey more sadness about his missing curry than Alexandra manages in her version. *g* 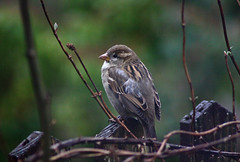 Young sparrow waiting for a turn at the feeder
Originally uploaded by Helen in Wales
A combination of a dreary wet day and the cold that's fading but still not better yet meant I didn't go out again today. I thus had to resort to photographing the little birds that flock around our neighbour's bird feeders and the hedge between the gardens.
Collapse