My time management system is just not working at the moment. Despite the lightbox, as usual at this time of year, I am functioning on what feels like half a brain. :(

Previously I have been looking at everything I have to do and setting myself a daily list of tasks, allocating 1 hour to one task and ½ an hour to another task etc through the day. I have finally admitted to myself that this approach is failing miserably, my brain can't hold more than one thing at a time and it's taking me most of the hour to get focused on the task in hand. As a result, I'm only ever doing a couple of things out of the list and then beating myself up for not doing more. So, I'm going to try following a Just Do One Thing method.

The advice to "Just do one thing" is normally applied to that state where you're so overwhelmed that you don't know where to start. The idea being that doing anything will make the situation better and it doesn't really matter where you start, so long as you do something. My variant is that I will "just do one thing" until it's done (or for one whole day, whichever is shorter) and then pick another thing and just work on that until it's done and so on and so on.

I have 3 more assignments to complete by the end of the month. I should have gone to my Welsh class this morning, but I was feeling too stressed about the BA assignments so instead I'm going to work on one of those until it's done. Everything else -- other than vital daily household stuff like buying and preparing food, washing up and doing laundry -- will have to wait. Its turn will come!

We will see if this approach works any better...

In other news, the tiny personal radio I ordered from Amazon arrived this morning. It works really well! So now I'll be able to listen to the radio while doing housework or gardening, which might encourage me to do more of both. I'm in two minds about whether to try listening to the radio or iPod while out walking. On the one hand, I feel I should be listening to the sounds of nature and I don't like the idea of not being able to hear cars approaching. On the other hand, doing the same few walks does get very repetitious and some additional amusement might encourage me to go out and exercise more regularly. Strange as it may seem, I'm missing the time I spent in the car on the long commute because it enabled me to listen to music and also to stories from Escape Pod, neither of which I have been doing since I stopped working.

Please don't worry if I'm a little quieter than usual. I will be skim-reading LJ for the next week or so, but most likely won't be reading everything or getting immersed in much debate. Therefore I might not be commenting as much. Please don't worry. It's not you, it's just that I need to focus on all these deadlines. 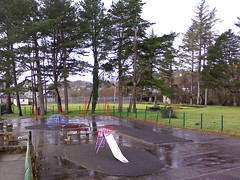 Deserted park in winter
Originally uploaded by Helen in Wales
Desperation shot taken with my phone of the deserted park, snapped as I walked back home from the Co-op. I'd just been to sign on and decided I'd take a short cut rather than walk back through town.

The park has become very run down of late. I used to bring the kids here when they were small, but the bowling green has been abandoned to the gang of boys who ride their bikes on the grass.

Supposedly it's all going to be made wonderful. The town won one of those TV votes to get a lump of lottery money, but so far there's been nothing actually done in the way of improvements.
Collapse