brownnicky, but got rather long, so I thought I'd upgrade it to its own post.

I sometimes suffer feelings of guilt because I gave my children the kind of childhood I wished I'd had, ie a rural one. Though ironically, by moving to a very very small town, they both had the kind of freedom I'd had as an inner city kid growing up in the north east of Manchester in the 50s and early 60s. Those were the days when you could actually tell a kid to cross the road by, "Look right and then look left and when there's nothing coming, walk briskly across." And what is more, they would be able to carry out the instructions. Nowadays you'd wait all day for a moment when there wasn't a moving car in sight in either direction. And there were no murderers or paedophiles around in those innocent times, so parents could let their children wander where they pleased without worrying. Oh, wait! There were those pesky Moors murderers, but I don't remember that impinging on our freedom.

But perhaps my kids didn't really want to grow up in the country. What if they'd have preferred the amenities of a city? What if they'd preferred to be mono-lingual rather than have to struggle in school with two languages? Parent guilt is easy to fall into.

I could have hugged my son when he came home just before Christmas and actually mentioned how he'd enjoyed the days when he was a young boy and could be out all day with his friends playing football until it got too dark to see the ball and how they'd made dens in the wood and swum in the river and been taken down old deserted lead mines and in fact done all the things the children did in the books I read as a child. I hadn't got it totally wrong!

One disappointment was that I could never get my kids enthusiastic about learn an instrument (though our daughter had private recorder lessons for a while) and they showed no sign of wanting to play music and sing like I did when I was young. They were both too into sport for that. They did both read though and our son, now in his late 20s, has rediscovered novels. His sister is probably doing too much non-fiction reading for her job as a university lecturer to want to read much fiction at the moment, but like

brownnicky said, I know they have the skills to read narratives and take enjoyment from them.

We also dragged them round castles and museums and stately homes and historic houses. (Our daughter, then still a toddler, set off the alarms in the Bronte house in Hawarth!) We've taken them on a canal holiday to see the delights of the Leeds-Liverpool canal where they could marvel at the decaying splendour of the Victorian factories and the bleak northern landscape.

The problem is, until the child is more or less grown up, neither you nor they know what they really want to do. It's also impossible for a parent to offer everything. There's only so much a human being can study or work at or experience during a normal childhood. Whatever you do, it's only a small sample and it's hit and miss whether you get it right or wrong.

So in the end we just have to muddle through and hope for the best. Which is something I need to keep reminding myself of when the depression tells me I was an awful mother.

rezendi, is very pertinent to the recent kerfuffle amongst many of my LJ friends regarding writing "The Other".

I have read many of the posts on the subject and I do think that people are trying to make it all much simpler than it is. It really isn't just a case of Evil White Western People Oppressing The Rest of the World.

I do sympathise a lot with what

deepad had to say. (I thought hers was one of the most interesting and thought provoking posts.) And why did I think that? because as a girl growing up in a grim inner-city part of Manchester, an area that was largely pulled down in the 60s in the slum-clearance programme (no euphemistic terms like "urban regeneration" in those days!), I didn't see myself in the characters in the books I read as a child either nor did I recognise my home environment in the settings. OK, the characters where white, but colour isn't everything. Their lives were totally different to mine. And yet, to me, that was one of the joys of reading; it gave me access to worlds that were not my own and allowed me to "meet" people who were not like me or my classmates. I wouldn't have wanted to read books about kids like me doing the stuff I did because that would be boring. I knew all that already. That's why I still read a lot of SF and fantasy and classic novels and thrillers and crime fiction. I want to be taken to places I haven't or can't experience in real life.

Having said that, I felt a wonderful sense of release when I read Elidor. Whatever the merits of that book, it remains one of my favourites because Alan Garner, by setting part of the story in the grim derelict streets of the slum clearance area, made me realise that you didn't have to set stories in the bucolic South of England or London. (Note that he only set some scenes there. The characters merely passed through the area I had lived in, they didn't live there!)

However, I have no intention of getting into any sort of debate about a Hierarchy of Oppressions. When I did the women's studies course in the early 90s, that concept had been abandoned as both meaningless and useless. I was surprised to see people trying to use it in this debate. I accept that to some people I might be lumped in with the privileged, even though I wouldn't accept that label myself, or at least only with reservations.

deepad said that I don't agree with, namely: One of the most frustrating arguments I’ve encountered is—If you hate it so much, stop bitching and write your own. This naive position stems from the utopian capitalist belief that all markets are equal, and individuals are free to be what they can driven only by their inner divine spark.

Firstly if Wales (which is a tiny country with an even tinier number of fewer fluent Welsh speakers) can sustain a literature in Welsh, then surely India can support a market in literature in her native languages? Yes, the Welsh literary scene is small. No, the writers cannot make a living by their fiction writing, but the books are written, published, read, reviewed, discussed and turned into TV dramas and films. It helps that we have the annual National Eisteddfod which awards literary prizes, but there is quality fiction published each year in Welsh and some of it is even SF or fantasy.

Secondly, in the words of the old proverb, "If you want something doing properly, do it yourself." It's no good just wailing, "You're doing it wrong! Do it better next time!" I'm a teacher. When I'm marking a student's work I don't just scrawl, "Bad work! Try harder!" on the paper. Just pointing out that something is bad is only step one. You then need to explain why it's bad and explain what is the correct way to do it. But far better than explaining is showing. Of course students are motivated to take note of what the tutor says and, with luck, will take on board the points raised. Writers won't necessarily have any reason to do so. If the books are selling well, then why mess with what works?

So the only way to guarantee that the story you want told is made available is to write it oneself. I can only speak for the British literary scene and that with only partial knowledge, but the rise of working class and women writers in the 60s showed that there was a market for a more authentic voice, so people who had been invisible before now became visible.

But that also leads me back to the Brick Lane controversy. When I did the short OU course on writing plays, we had to read some scenes from a play by Edward Bond called Saved. I hated the play. Not because it was violent but because of the negative portrayal of working class life. I felt that by putting such things before a middle-class audience, he was pandering to their view of what working class life was like, and I knew, having grown up working class, that he had taken one aspect and magnified it to make it seem like that's all there was. So I sympathise with Monica Ali, but also have the tiniest feeling of sympathy for those of the Bangladeshi community who condemned her. It is tempting to want one's community portrayed in a glowing light, but that's only making community sized Mary Sues.

The only thing you can do it just tell a story to the best of your ability and some people may like it and some may hate it, but it has to be the story you want to tell, whether that means writing about dragons and unicorns in a pale copy of Middle Earth or whether it's writing about people just like you in a setting just like the one where you live. 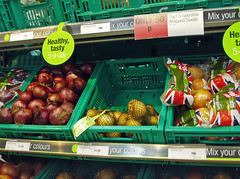 Veg shelf
Originally uploaded by Helen in Wales
I was in two minds whether to post this or not but decided that even a boring photo was better than no photo at all.

Desperation shot of the veg shelf in our local supermarket!
Collapse