As a few of you may have been aware, I've been talking about getting another cat since at least last summer. I've been following Lesley Tarleton's blog about the Freshfields pony and cat rescue centre, but somehow I hadn't managed to get around to going to actually acquire a cat.

Well, I decided that today was as good a day as any for acquiring cats, so let me introduce Aimee. 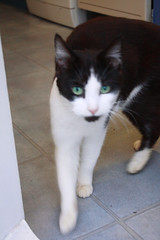 Photo is a bit "soft focus" :) but she wouldn't sit still to be photographed. Expect to see a lot more of Aimee in the future!

Here's another I took with the phone so I could send pictures to my son and daughter.

I don't know whether her original home had many books, but she's already discovered the reading habit after moving in with us!
Collapse