The observant amongst you may have noticed that I've stopped posting the 365 photo challenge photos. That's on account of me abandoning the challenge due to deadline stress.

To be honest, I'm amazed I lasted as long as I did. Trying to take a photo a day over the winter months wasn't easy, but in the end I managed a total of 91 days from early December to early March. I was unemployed when I started, so had plenty of time to spend on photography. Now, however, I'm not only working but doing several degree level courses. I have a heap of assignments to mark and several assignment deadlines looming over the next month or so. I might pick up the challenge again over the summer when I'll have another short period of unemployment (the problem with teaching short courses on a course by course basis). Or maybe not. I will see how I feel.

Was it worth it? Yes, I think so. I've taken quite a few photos that I wouldn't have taken if I hadn't been doing the challenge and some of them weren't too bad either. I've learned that the most unpromising thing can make a decent photo if you can find the right way to look at it. I've also learned not to take too many photos in one session. Most of the time went not in taking the photo but in selecting and processing. After getting into the habit of taking masses of shots, just because I can, I've moved a little way back towards the film days and now just take two or three. If it were a special photo or it had been a big struggle to get to the location, for example as the ones I took of the sunset over the estuary, I would still take plenty and pick the best, but for more routine shots, I'm more prepared to trust my first instincts and check via the review facility that the photo is sharp, then leave it at that.

I'm still in the photo-a-week group, but I find that's eminently doable, even when I was working full-time and commuting last year.

One of the Flickr groups I'm a member of is a photo-a-week project. As a spin-off, some of us are participating in enabling a small furry monkey toy to travel around the world. Chump the Minkie started in Venice, visited Holland and is now doing the UK. After starting in Hertfordshire, she then moved on to Cambridge and has now crossed the country to spend a few days with me. She arrived safely this morning.( Collapse )

While Chump stretches her legs after the long journey from Cambridge, Aimee tries out her travelling box for size. As you can see, Chump's appetite is fine and she's indulging in her favourite snack. 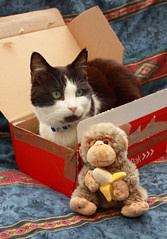 My Tweets for today ( Collapse )
Collapse