The weather is so changeable at the moment, that you just have to grab any decent days as they speed past.

We initially had no plans for a walk. G was busy working on some stuff for college when his new Linux computer arrived. I got roped in to help him assemble it and try it out. Now we've both been using computers for over 25 years, but we have had little experience with Linux, so we weren't totally sure that everything would work. What we didn't expect was that it would be the monitor that caused us all the trouble.

We put everything together and plugged it in and the computer whirred into life, but the monitor was as dead as the proverbial dodo.

"Have you switched it on?" I asked.

There was a light to indicate whether the power was on, but however carefully we examined the monitor, we could find no switch.

Presumably it didn't have one.

I checked the instruction book, which said that if the monitor failed to come on, to try a different power lead that was known to work. We did this. Monitor was still dead. At this point I felt gloom descend. I was going to have to take it back, G would be in a bad mood, I'd waste the afternoon driving to PC World in Bangor and, even worse, we had muddled all the packaging up! It was going to be a nightmare sorting out which bits of plastic packing belonged to the monitor and which belonged to the computer.

And then G managed to press the power light in a slightly different way and -- bingo! -- the monitor came on!

All was well and I narrowly missed a most embarrassing conversation with a shop assistant. It would have gone something like this.

Me: "This monitor doesn't work!"

Shop assistant: "Have you tried switching it on, madam?"

Me: "Of course we have. Do you think we're idiots?"

*I try to sink into the floor with embarrassment*

But I do think that Acer monitor has to take the prize for Most Well Concealed On Switch Evah.

Anyway, after all that palaver, G decided that as the weather was lovely, a long walk would be good to calm us down and this is where we went... ( Collapse ) 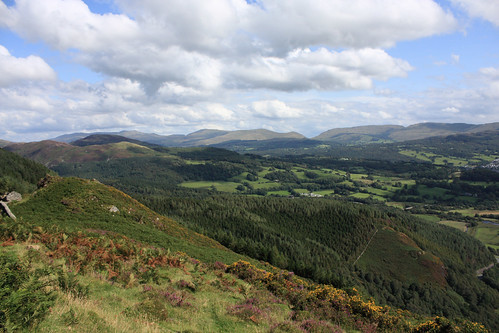 I love the distant forest in this shot. The dark trees look like green fur.

And just to round off the day, it's now tipping it down with rain! But I don't care, I'm snug and warm and well-exercised. :)
Collapse