For many years, I have bought my shoes online. I have found a lovely company whose fittings suit my wide and difficult to fit feet and their shoes, though not cheap, wear extremely well, so are good value for money.

Now, perhaps I'm old-fashioned, but I always thought that my relationship with this firm was that of customer, not "fan". Yes, I like their shoes. I wouldn't keep buying them if I didn't. I have also recommended them to others, but I am not a "fan" of their shoes in the same way I'm a fan of Terry Pratchett or of fantasy books in general. I don't deliberately seek out other people who wear this make of shoe and enthuse together about how much we love them. I don't eagerly await the next new product in the range in the same way that I eagerly await the next book from a much loved author. Neither do I feel the need to collect the whole set. No, I buy shoes when I need them and only when the current pair have become too shabby for the purpose or I need a new pair for a specific event, eg wedding or graduation and I don't already have anything suitable.

I must admit that after a brief flirtation with Twitter, I very rarely visit and almost never post, but the people I follow on Twitter are friends. I don't actually follow the big names like Stephen Fry or whoever else puts a lot of effort into posting tweets for their fans (mostly due to there being a finite number of minutes in a day), but I can see the appeal. However, I do not want to sign up as a "fan" of a shoe company and receive their missives, which are no doubt simply press releases and adverts.

I mean, how much can one say about shoes?

I seem to be getting busier and busier. Wednesday was Welsh class in the morning and then I waited in all afternoon for the plumber who was going to look at the gas fire in G's study and also our combi-boiler. The gas fire had stopped working; it just would not light. The boiler is fine, but is overdue for a service, so we just wanted it checked over. ( Collapse )

Then Thursday evening we drove down to Newport. G had a meeting with the university, but instead of our usual trip to the Caerleon Campus, the meeting was being held at the Allt-yr-Yn campus in Newport itself. We stayed overnight in a Travelodge at Pontypool, thus leaving just a short drive in the morning.

We only got slightly lost in Newport. :) What looked, from the map, to be a normal roundabout was actually a main road continuing on over a flyover while the roundabout was underneath, reached by a slip road... that we failed to take. Anyway, we wandered around a few streets and eventually found our way to the right area. Having deposited G in time for his meeting, I left the car where it was. I knew that if I drove anywhere, without a navigator I'd never find my way back, so wisely I walked down into town, which took little more than 10 minutes.

Some shops were reconnoitred but I spotted the transporter bridge in the distance and tried to walk to it. This was as close as I could get. 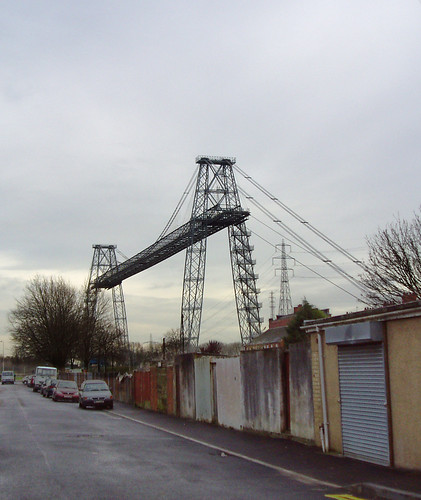 There must be a way right to the bridge, but I started to think that I might get lost if I wandered any further and, besides, I'd come quite a way and I still had to walk all the way back to the campus. On the way back, I bought the items I'd spotted. Nothing very exciting, just new slippers, dressing gown and undies for me and a new pair of canvas trainers for G.

Back at the car, I caught up with LJ using the Eee and the dongle and then we drove home.

Today I popped up to see M and B and Brith, but the weather was too horrible for dog training, so I just helped B sort out problem with her phone account. (She must have clicked on something that she didn't mean to because AOL were trying to switch her away from BT and onto their AOL Talk scheme!) I also talked her through buying an item on the web.

And then this afternoon, I should have been marking, but I still feel slightly sniffly and I was tired after the drive yesterday, so the afternoon has vanished in trying to sort out students who are having problems with submitting their assignment and generally catching up online.
Collapse