Happy New Year to you all!

We had our usual quiet evening. A nice roast dinner (chicken with stuffing, roast potatoes and veg) and a bottle of wine, followed by a night watching things on the iPlayer until just past midnight.

I'd forgotten about the so-called "blue moon", but as I went into the kitchen just after midnight to switch everything off for the night, I noticed a) some neighbours a few doors away was letting off fireworks and b) that it looked unusually bright out in the back garden. Stepping outside, I found that the grass, picnic table and shed roof were glittering with frost and the full moon was high in the clear, cold sky.

I was mildly disappointed that it wasn't actually blue. (I had forgotten the explanation I linked too, which personally I find unsatisfactory as it clearly infringes the Trades Descriptions Act!) but it was very beautiful.

A lot of people are doing detailed end of year or even an end of decade round ups, but I'll give that a miss due to lack of time and inclination. In brief...

2009 wasn't a bad year for us and it was, on the whole, a good decade. Both children got married to lovely partners and I am now a grannie. G completed a PhD. I was teaching in probably the best jobs I've ever had and we started travelling abroad for the first time since the early 70s so I got to visit America twice. There was a slight blip at the end when I lost my main job. But that hasn't turned out too bad and after a year of being very cautious while we saw how the money went, we are thinking of an Interesting Trip Abroad for some time in the summer of 2010. I also seem to have got my desire to write back, at least partly due to doing the two Open University creative writing courses. All being well, these will give me a diploma later this year. More importantly, the studying and assignments have consolidated what I knew before and have filled in some gaps (notably the poetry and hearing the words on the page instead of just processing words directly into pictures). I'm also working on the first draft of a totally brand new novel that didn't exist even in the vaguest form before last summer. (And for someone who had been working on old ideas for some years, that is both refreshing and encouraging. There was a point where I began to think that new ideas were drying up as I got older!)

Anyway, that's enough of looking back. I have new projects for 2010 and I have no doubt that I'll be talking about them here in due course. So for now I will just say...

Point reached on journey: Frodo, followed by Sam, has sneaked off with the ring and we have run from Parth Galen searching for him. Attacked by orcs! Boromir mortally wounded and Merry and Pippin captured.

I reached Rauros Falls a couple of days ago, so as I was about to embark on the next leg of the journey, I looked for the nearest equivalent I could find locally. 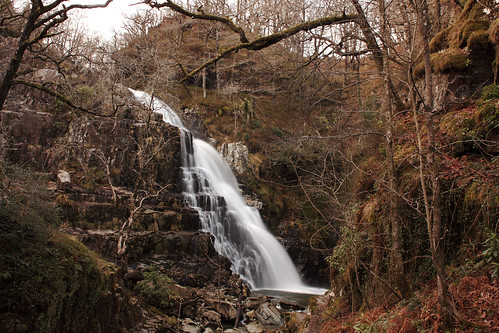 Not quite the Rauros Falls, but it will have to do. :)

I've photographed these falls a few times before, but I think this is the best effort so far. I wasn't hopeful because it was late afternoon and the light was already fading, but a tripod makes all the difference. Actually, I think the absence of strong sunlight helped because usually there's too much contrast between the sunlit trees above and the rocks below that are always in the shadows. 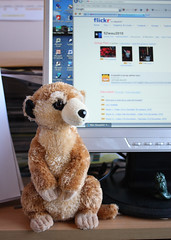 Meet Maurice the Meerkat
Originally uploaded by Helen in Wales
Last year I played host to Chump the Minkie and George, two little furry toys who were travelling around the world staying with members of the 52 Weeks About You Flickr group.

I had great fun showing them some of the local sights, so this year, for the 2010 group, I volunteered to organise another little fellow to undertake a new round the world tour.