G's computer just froze totally on Saturday. He wasn't doing anything out of the ordinary, just watching a video clip on the BBC web site, something he must have done hundreds of times, but it froze and the sound just made a buzzing noise. The only way to switch off was to hold the power button in. It seemed OK for a little while, but it totally froze again that evening while we were trying to watch the iPlayer.

We tried the Web, in case it was something that was easy to fix, but couldn't identify the beep code and by then it was nearly midnight, so I didn't call the PC World helpline until yesterday. They were not terribly helpful as they just said it was up to Dell to deal with it. (Fortunately the computer is still under warranty as it's less than 12 months old.) Dell's helpline wasn't open on Sundays, so I had to wait until this morning to call them.

And you know what? I had a very helpful chap who talked me through the steps to get it working again.

After a moment of total panic -- Ulp! You want me to open it up and do things to it? -- I managed to follow his instructions, removed the memory and replaced and, lo and behold! it worked again.

This is such a relief as I was expecting a long saga of having to send it away for repair and G having the sulks until he got it back, because he had important work on there that he hadn't backed up! *Sigh*

So he got away with it this time, but I had to print a heap of documents for him yesterday and today I'm going to make him use the mobile hard drive to back up all the important stuff. I don't need the small mobile drive any more as I bought the big Iomega drive for backing up photos and if I want to take the odd thing into the college, like a PowerPoint presentation, then I use a memory stick.

Not only did I fix my husband's computer this morning, but I changed the filters on the vacuum cleaner and removed two bent paper-clips from its innards.

The suck has now been restored to maximum suck instead of the almost-impossible-to-feel suck it was demonstrating yesterday. 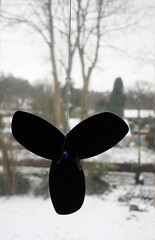 No sun today
Originally uploaded by Helen in Wales
10/365

To my surprise the solar charger has been able to make electricity over the past few days. Even though it was cold, the sky was clear and the sun was bright.

But today was totally overcast and so there was no chance of generating anything. 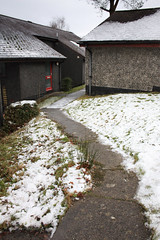 The snow is starting to melt, but in case it froze again overnight, I cleared the front path.

What? You can't expect brilliant photos every day. Some days they're going to be a bit mundane. :)
Collapse