carl_allery expressed an interest in seeing the colour version of the street scene, so here it is for comparison, along with the original shot, as it came from the camera.

Now, I have always been a big fan of colour. Heavens, I started taking photos as a kid with one of these (which apparently cost a fiver when new back in the 1950s and can still be had for a fiver today on eBay. ☺) and all we had was black and white. I'm not saying that colour film didn't exist, but it was far too expensive for the likes of us. Getting my first decent camera at the age of 14 and finally being able to take colour pictures was a joy.

So until now, I've never really seen the attraction of black and white, but having set myself the theme of "black and white" for the month of March, I'm starting to finally get it.

The picture as it came from the camera was sloping and had too much blank foreground. I had to rotate, then crop and do a little bit of cloning to add more stonework at the top left where rotating had resulted in some blank canvas. The finishing touches involved blurring the car's number plate and removing a few small traces of the second girl's toes and finally changing the image to black and white using PhotoShop Elements' Convert to Black and White option on the Enhance menu. I then try the different pre-set conversions and choose which works best from: Portrait, Vivid Landscape, Scenic Landscape etc. IIRC, this one was Scenic Landscape. If necessary, I also use this conversion feature to lighten the picture a shade and may also tweak the contrast with an Adjustment Layer. Though this might sound complicated, I can do it almost as quickly as explain it because they're PhotoShop skills I have at my fingertips.

The real black and white afficiandos would no doubt spend longer and do it manually in CS4 with curves and levels and brightness and contrast and whatnot. One day I may get to that level, but I'm still finding PhotoShop Elements has enough for my needs. 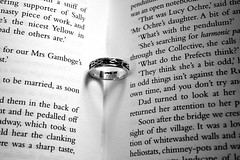 Definitely a desperation shot this one. An attempt at the heart shaped shadow shot.

To do it properly, I'd need to control the lighting better. This was just light from the window.

The book is Jasper Fforde's latest, Shades of Grey. I'm a bit disappointed with it so far. Here's hoping it becomes more enthralling soon.
Collapse