G had organised another field trip last weekend, this time down in South Wales. As it's about 2½ hours drive, we discussed whether to stay over the night before (Saturday) or the night after (Sunday). When I remembered that it was the weekend the hour went forward to British Summer Time, that decided it. Having to get up at 5.30 am did not sound like fun. Well, it would be 6.30 am according to the clock, but it would feel like an hour earlier. So we booked a room at the Travelodge on the outskirts of Merthyr Tydfil.

This meant that I could get most of a day's work done on the Saturday before setting off late afternoon to drive down. After checking in, we had a meal at the nearby Italian restaurant and then retired to our room to watch Wallander on TV (the Swedish version, not the British Kenneth Branagh). 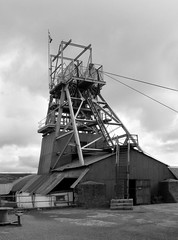 Next morning, as we were still quite full from the previous evening, we didn't bother with breakfast and drove to the Big Pit at Blaenavon, which was a working coal mine up until 1979 but which is now a mining museum. As it's now part of the National Museum of Wales, there is no entry fee. The rendezvous time was not until 11, so we went up to the cafe (was originally the miners' canteen) and had a roll and cup of tea.

There turned out to be 10 of us in total, which was a good turnout, considering the distance. I think everyone else had also made a mini-holiday of it and had either camped, stayed with friends or in a B&B the night before.

The tour underground was... not disappointing, exactly, but not quite as exciting as the first time I did it, which must have been shortly after the mine opened to the public and not long after it had last been worked. Then it felt slightly dangerous and as though the men had only just downed tools and walked out. Now it feels safe.

I remember thinking last time how different it was to the old gold mines round here. The gold mines are in very solid rock and so the tunnels are pretty robust, even though they've been abandoned for a hundred years or more, but in the coal mine I could see where timbers had been newly replaced to shore up the tunnels that are in much less stable rock and are much deeper underground where the pressure is so much greater. Now everything looks just a bit too orderly and secure. Everything has settled down. It no longer feels like a working mine that's just been abandoned, it feels like a museum. Which I suppose it is, but I'm glad that I managed to visit when it was newly opened to the public.

From there we went on to another couple of locations, but I'll write those up tomorrow.

For the Doctor Who fans out there, while Googling for pictures of the mine, G discovered that a Doctor Who episode was filmed there. It's not one I've seen as it was on at a time when we didn't have a TV, but here's the link...
Collapse