To avoid spamming your friendslist with a string of photos, here is one catchup post of the remaining 365 photo-a-day pictures to the end of this month. ( Collapse )


Also, further to my post of yesterday saying that I was going to take a break in April. After just a couple of days without taking a photo, I'm starting to miss it, so I might not take a complete break but I'll ease right back during April and just post 2 or 3 a week and then see how I feel in May. 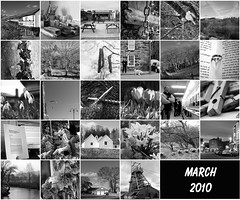 March mosaic
Originally uploaded by Helen in Wales
For March, I chose the theme of "black and white". Occasionally I felt that the photo for that day wasn't really suitable for conversion, but I wanted a monochrome mosaic at the end of the month, so converted it had to be!

There are some, however, that really worked well in black and white, better, probably, than the colour version so I think I've learned at least something about monochrome and from now on I'll consider it as an option instead of automatically keeping the photo in colour.
Collapse