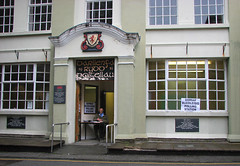 I'm always grateful that we don't have such long election campaigns as the US. I've had enough of the election already and campaigning has only lasted a fwe weeks.

Anyway, as we'd run out of milk, I toddled into town before 8.00 am to vote, buy milk and pick up the local paper. Now I won't get engrossed in my work and forget to do it.

The right to vote was hard won, both for women and for working class men, so I firmly believe that everyone should vote, even if it seems pointless because you live in a safe seat. As

brisingamen says here, if people don't exercise a right, there is ultimately the danger that it might quietly vanish.

Having said that, I don't get as worked up about voter apathy as some people do. I don't think it's because most people don't care but because they're reasonably happy with how things are and don't see that a change of government would solve the problems they do have. The British people will soon let the government (of whatever party) know when they really don't like something, as Mrs Thatcher discovered over the Poll Tax. It would, of course, be better if people exercised their democratic right at the ballot box rather than going out onto the streets and rioting, but if it comes to it, Brits are not known for being a pushover.
Collapse