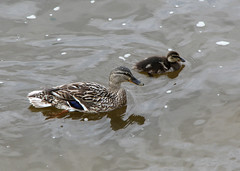 I decided that I needed to go for a proper walk today, so I went down the old railway to Penmaenpool hoping for ducklings.

Unfortunately, there was only one and no cygnets either. The swans were over on the other side of the estuary, keeping themselves to themselvs, so they may have a nest.

You would think that living in Wales it would be easy to learn Welsh to the point of being fluent and using it in every day situations. Well, you would be wrong!

I was actually somewhat reassured to read that it's not just a problem here in Wales. I have to admit that I'd always assumed that if I lived in France or Italy, I would speak the langauge fluently by now, and I'm sure I would have been forced to use it far more than I do here, but it seems that the problem is a common one.

However, in Wales the problem is magnified by the fact that everyone -- apart from toddlers in families whose first language is Welsh and perhaps the very occasional elderly person -- is much more comfortable speaking fluent English to you rather than hear you struggle with their own language. (And I suspect that the situation is even worse in Ireland and Scotland for those wanting to speak Gaelic.)

I used to get frustrated by this. I would think, They say they want to preserve Welsh, surely they want people to learn the language? So why aren't they encouraging me? Well, there are lots of reasons, some of them obvious, others more subtle and complex. Here are just a few. ( Collapse )

There are probably more reasons, but those will do to be going on with. I will write about possible ways around these problems in another post.

(Crossposted to LJ and Dreamwidth. If you want to comment, please feel free to do so at whichever site you find most convenient.)
Collapse