Here's some useful information brought to my attention by


For those concerned about the privacy issues raised by the new LJ facility to cross-post comments on someone's locked LJ post to Twitter and/or Facebook, please go and do this poll (which it seems LJ will take notice of).


To be honest, I'm not too concerned personally, because as a teacher I'm very careful what I post, even under friendslock. As it happens, my family already know my LJ name as do some RL friends. (It's more or less the same as my Flickr name.)

I also trust the people on my friends list and anyway I have different levels of filter for anything in the least bit sensitive. However, I can see this being an issue for many people, so while the ability to cross-post one's own posts makes sense (for those who like to do that kind of thing), being able to cross-post a comment to someone else's post makes no sense at all. I can also see the danger that people who would never intentionally betray a confidence might get into the habit of cross-posting everything and tick the box without thinking.

Another issue that no one has addressed is, will the comment make sense out of context? Facebook and Twitter and full of random rubbish as it is[*], comments to Lj posts -- which are likely to mean nothing if you haven't read the original post -- are just going to increase the noise to signal ratio even more.

[*] At the risk of being thought a middle-aged curmudgeon, the re-tweet feature on Twitter really annoys me. You can end up seeing the same thing re-tweeted by several friends. It also means I end up reading stuff I'm not interested in and has led to me dropping people I would otherwise like to follow (for their original content) but they post so many re-tweets, I get irritated.

And as to Facebook... I'm really not interested in whether someone has had a new calf born on their farm and I don't want to join their gang or whatever else these posts ask for. I wish those game applications only showed up to people who are also signed up to the game and were invisible to other readers. As far as I'm concerned, Facebook is just a way of having the contact details of people I only know online would lose touch with if something happened to LJ.

After lots of price checking on the interwebs, I eventually settled on an iPod Touch 8 Gb 3rd generation and it is on its way to me even as I type.

I know that the new shiny 2010 version is out and on sale right now on Amazon etc, but that would mean paying £189 for the 8 Gb model instead of the £114 that I have paid. I honestly don't think that I'll want or need to take and edit HD video, I don't have any wish to do video calls and I already have 3 cameras (not counting the crappy low res one in my phone), so I don't need a camera in the iPod. Saving £75 pounds is more important because that's money I could spend on something else if I need to. :)

I know when I initially mentioned that I was lusting after the Samsung Galaxy S, it was suggested that indulging oneself once in a while is fine -- which is true, up to a point. But spending more than I need to on a gadget that I suspect I won't use to full capacity could easily end up encouraging the depression. I want to enjoy using the features I will find useful, not suffer a pang of guilt every time I see it so, I dropped the idea of the new super-duper phone and went with upgrading to a new iPod instead.

Looking at the price of 2nd generation iPods, they seem to hold their value well, so I can't see the price of the model I bought dropping significantly in the near future, so I may as well have the use of the gadget now rather than wait.

As I see it, the features I will use are:

* playing music (my iPod Nano is full and it is too small to hold my entire library of music, modest though that is.

* reading ebooks (I have tried reading ebooks on the Eee and it works very nicely, but the Eee takes up more room on the dining table -- yes, we do read as we eat, shocking, I know! :) -- I could seriously downsize the number of books I have if I can start reading ebooks. I could also save the cost of the iPod by reading classics and free novels on the web instead of buying more paper books).

* being able to check in on my students when I'm away from home (this will depend on being sure of wifi access, whereas with the Eee and the dongle, as long as I have a mobile phone signal, I have internet, but it gives me another alternative and as long as I know there will be wifi, it saves a bit of weight in the luggage)

* reading documents on the go, for example while at the BA Education class. It will be quicker to switch on an iPod than boot up the very slow college computer and log in.

* 0ther (I'm sure there will be more useful things to do with it when I actually get to know the device).

There will still be things that will require the Eee. I really don't think I could mark assignments on the iPod. Even if it will run the necessary software (word processor capable of reading and editing Word documents plus an Excel spreadsheet), doing serious work for long periods on such a tiny screen is probably a no-no. Besides, I do prefer not to put all my eggs in one basket. After thinking that my second-best camera was broken on holiday, it made me grateful that it was only the camera and it wasn't also my phone, ebook reader and mobile web connection as well!

Now I just have to wait. I don't often buy from eBay, but I've been perfectly satisfied with the purchases I have made (Canon Powershot S3 1S and the ukulele), so I'm just crossing my fingers that this will be OK too.

I know that most of you won't understand Welsh, but I just had to post this here because it's so cute. :)

The story of Branwen from the Mabinogion animated with Lego by the young pupils of Ysgol Cymerau (Cymerau School) in Pwllheli.

Um... Well, it's sort of cute, though it does contain Lego violence and blood is spilled... 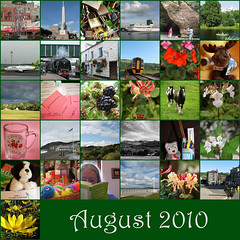 August mosaic
Originally uploaded by Helen in Wales
Another month completed -- and this time I did take a photo every day!!!

*Does a happy dance of celebration* 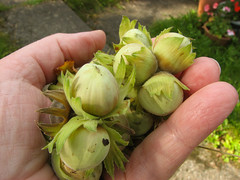 And we're already two days into a new month!

I mowed the front grass yesterday and picked up these hazelnuts from under the hazel tree.

Unfortunately, they never have any nuts inside, so though they look enticing, they are disappointing if you like to eat hazelnuts. :( 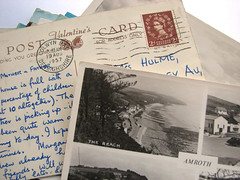 I managed to do a bit of decluttering yesterday and got rid of an old album into which I had stuck a collection of old postcards.

Most of them were sent by family and friends from the late 50s to the mid-60s.

Once I took them out of the album, I discovered that the backs were actually more interesting than the fronts and they brought back some happy memories of holidays long gone.

I will be keeping the postcards, but I've ditched the album. The cards on their own will take up far less room.
Collapse