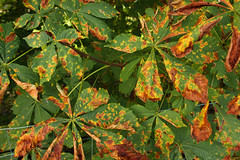 Having chosen "autumn colour" for my October theme, I'm going to have a lot of photos of trees this month!

I've been choosing my walks so that I can keep visiting this horsechestnut tree to collect the conkers.

Too busy today to go out looking for something more interesting.

The trees are showing signs of autumn colour now. 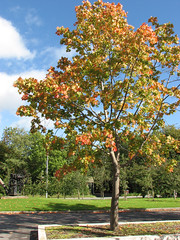 The trees at the Ruthin Craft Centre are looking very pretty at the moment. 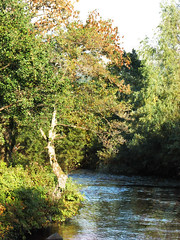 I quickly grabbed this shot on the way to the evening class. I'd spent most of the day working on my dissertation for the BA Ed course I'm doing part-time.

I've added a texture (taken from one of the rocks I photographed last weekend) to give it a bit of oomph.

I haven't said anything much about my self-employment idea, but I will be able to Reveal All very soon now because this afternoon, I managed to install the forum software on my web space. :)

I had previously managed to install the software on the laptop running Linux and I was going to play with it off-line first to get the hang of it. However, sadly the laptop died today. *sniff* Of course it was about 11 years old and I had bought it second hand (it was running Windows 98 before I installed Linux on it) and most of the keys had been worn blank with use, so I suppose one can't expect it to last forever.

Anyway, I decided to take the plunge and have a go at installing it for real. After a couple of false starts and a bit of faffing, it seems to have worked!

I've decided that's a big enough step for one day, so I'll have another play tomorrow, but if I can get to grips with managing forums over the weekend, I will explain what my plans are next week and will put out a call for volunteers to help me test everything.
Collapse