I probably don't need to say this to the writers on my friends list but, for heaven's sake, if you're going to write a story with characters who have names taken from a language and culture that is not your own, please at least check that you're choosing names of the right gender.

I'm not going to link directly, to spare the author's blushes[1], but "Llinos" is a very common girl's name here in Wales and, in the book in question, the character Llinos is male! In fact, of the list of names she had chosen, most of the "female" names were male and vice versa.

This would not have been a problem if she'd asked earlier, but there is already one book published and on sale with the male Llinos as a minor character, plus a female with a male name (albeit a much rarer one, so she just about gets away with it). Meanwhile the latest book, in which Llinos has a much bigger role is due from the publisher in about 3 months time...

What is more, you really should ask a native speaker or two. It isn't really good enough to post a question to a bunch of learners in an LJ community. I know the author is in Canada and native Welsh speakers are few and far between there, but there is this thing called "the Internet", which she did eventually think to use, if rather late.

Actually, all she had to do was put the name "Llinos" into Google and see what came up, namely: the top two links are to baby name sites which gives the meaning and says it's a female name; below that is a page about Llinos Owen, which not only has a picture of the young female bassoonist, but if you should happen to be browsing with images switched off,[2] it refers to her as "she" throughout; there are also a couple of links listed further down that don't even require you to click through to see that Llinos is a female name.

What she seems to have done was look at lists of flower and bird names and chose from there, not realising that some were used as names and that the gender might not be the same as in English. ("Celyn" means "holly", but is used as a male name. "Llinos" means "linnet", but used as a female name.)

[1] But if you really want to read the whole thing, just look at the communities I'm a member of, there is only one related to learning Welsh (Cymraeg).

[2] Does anyone do that these days? I have occasionally been tempted when connecting away from home via the dongle. 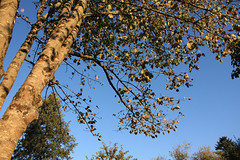 We had a few days of absolutely gorgeous weather -- most unlike October.

This was taken at the bottom of our garden. 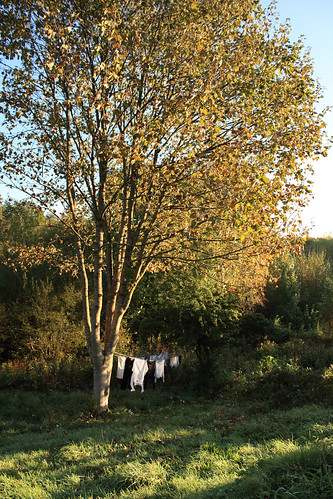 This might be the last day for drying clothes outside this year.

After a few glorious days that seemed to have been borrowed from early summer, the weather has turned grey and cold. There has just about been an overnight frost some nights, though it's melted before I got up. Today it was grey and drizzly.

Interestingly, my washing line would be prohibited in many places in the US, at least according to this article, but it seems Americans are fighting back.

Why anyone would have a problem with a washing line, I don't know. Rotting cars, rolls of old carpet and other assorted junk dumped in a garden, fair enough, but clean washing blowing in the wind on a sunny day? 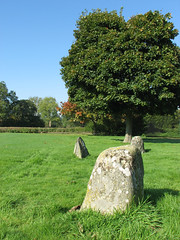 These little standing stones are part of the Gorsedd Circle.

This particular circle is by the Pafiliwn (Pavilion) where I go for the Wesh class in Corwen.
Collapse