heleninwales climbed the spout again walked into the town.

Yes, it was sunshiny at last, after two or three days of solid rain. The birds are actually starting to sing in the garden, as though they think that though it's clearly not spring yet, there may be a spring in the not too distant future. I posted a few more Christmas cards, which have now become belated New Year cards. I also took a few photos of iron railings that may be suitable for the Cliché Saturday Flickr group. When I got back from town, I finished the last of the commenting on the pieces of writing that my students have been posting for the online tutorial and I have looked at the next assignment for the OU Welsh course I'm studying.

All in all, it's amazing what a bit of sunshine can do to make me feel generally perkier and more productive.

In other news, this is a wonderful example of why I read LJ. Originally posted as a reply to

After initially contemplating mole, I decided that I was a capybara. If you want to know what rodent sign suits you best, why not have a look?

This has now lead me to thinking about devising my own geologically based zodiac signs, though I haven't quite worked out which story it would belong in. 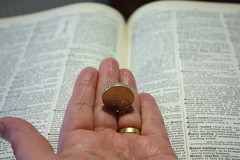 The theme this week was macro or closeup. Seeing as there are no flowers around to do nice macros of, I thought I'd play around with variations on the heart shadow cliche.
Collapse