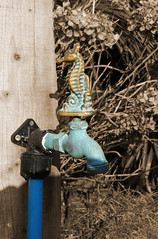 This charming sea horse water tap was just beside the footpath.

I think we've escaped the worst of the gales that are attacking the North of England, but last night was a very blowy night with a minor power cut at some point (the alarm was flashing when I woke up). There was then a much longer power cut mid-morning, which was not good because I need to work today. G ended up sitting in the conservatory (the lightest room) huddled up in his warmest coat, so he could do some marking.

Anyway, in the end I didn't manage too badly. I had been efficient at some point in the past week and I had copied the files I needed to a memory stick. I had worked out how I could re-download them using the dongle and the Eee, but finding I already had what I needed saved a bit of bother.

The new (to me) laptop proved to be capable of lasting for about 40 minutes on its batteries so I got an assignment marked and was just transferring over to use the Eee when the power came back on. I also used the little emergency camping gaz stove to make cups of tea and coffee mid-morning and I could have heated lunchtime soup on it if the power hadn't returned when it did. So all in all, the disruption was far less than it could have been.

Looking out of the window, I can see that the water is rising on the Swamp (as we call the scrubby woodland beyond our back garden). It's just as well that the field trip was last week not this week or it would have had to be cancelled.
Collapse