Yesterday I made good progress on the questionnaires for the BA Dissertation and sent out the emails inviting students to answer my questions.

Yesterday was also a rehearsal for the Welsh play we're doing. In one way, my journey to the Llanfair Village Hall was a bit pointless. Only five of my group were there and we didn't actually get to rehearse because people were sorting out the technical stuff like the lights, making sure the fog machine worked and puzzling out how to do the ghostly coach in the final scene. (Our group are going for the minimalist approach using only sound effects and the characters staring and pointing.)

On the other hand, the drive there was glorious and it was good to get out of the house and away from the computer for a while. The May blossom is already out, turning the hawthorn a foamy white. Flowering cherry and other flowering trees all seem to have rushed out together and we haven't had any rain storms to destroy the blossom. It was also nice to chat to people. Since being made redundant, I have to make an effort to meet people and it's all too easy to slip into hermit mode. It was also good to see what they were doing with the stage layout and lights etc because it will make things easier at the full dress rehearsal on Monday.

Today looks like being another gorgeous day (the view from my study window looks almost exactly like the icon) and I will try to get out for a walk later. I did manage to eat breakfast outside in the garden and sat for about half an our absorbing sunlight, drinking tea and going over my Welsh flashcards. That was good.

But mostly today I need to make progress with the literature review...

I was torn. Should I obsessively check the Google docs page every 2 minutes to see if anyone had responded to my questionnaire? Or should I leave it for a day or so to give people time to respond? Not everyone is glued to their computer like I am. :)

Anyway, I held out until now, which is about 24 hours after informing people that the questionnaire was available.

I have 5 replies! *does a little happy dance*

That is such a relief because it means that I just about have enough data to work with even if no one else responds and I intend to do two more interviews. Phew!

In other news, it's really hot again here today, much hotter outside than in, in fact, which is a consequence of having the cavity wall insulation done last year. It does lead to the strange (to me anyway) idea of having to remove clothes to go outside rather than don extra layers.

Also, it's been so sunny that the little solar charger has made enough electricity to recharge my iPod. :)

I have to be up early tomorrow because I am driving up to Chester to meet the offspring, their spouses and the grandoffspring because we're going to spend a day at the zoo.

Erin (now 4½) loves zoos and our daughter usually gets a season ticket to Bristol Zoo. Will (6 months) is still too young, but I'm sure he'll enjoy the day out.

Heaven knows what the weather will be like. After glorious weather, I narrowly missed a drenching when I went shopping this afternoon. I'd just paid for my purchases in the Co-op when the woman on the till said something about the rain. When I looked out of the window, it was absolutely torrenting down. Now it can't keep up rain that heavy for all that long, so I waited for a bit and as suddenly as it had started, it stopped and I scampered home as fast as I could before there was more rain. That turned out to be a wise move because it rained heavily and thundered for an hour or so. We could almost see the garden and the trees behind the house growing greener as we watched. I'm sure the grass will have grown a foot by Monday! 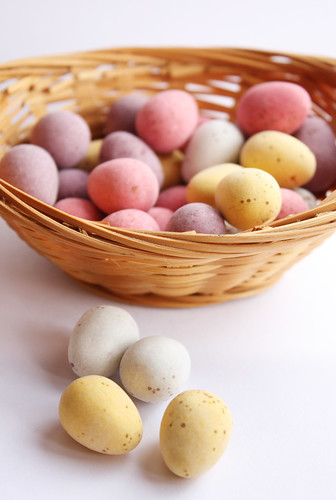 Cadbury's chocolate mini eggs, a photo by Helen in Wales on Flickr.

The only eggs I had in the fridge for most of the week was one slightly dented egg that was the last of a batch of slightly damaged eggs a friend had given me because they weren't perfect enough to sell.

One slightly dented egg was not going to make a good photo, so at the last minute I had to buy a pack of Cadbury's mini eggs so I could take a photo for the theme.