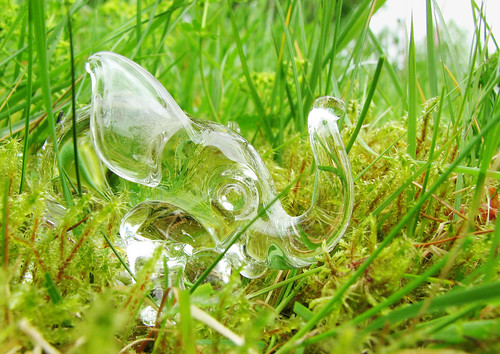 Little glass elephant goes exploring, a photo by Helen in Wales on Flickr.

This week's theme was: Glass

This is our front 'lawn', though to Little Glass Elephant it's quite a convincing jungle. :)

In other news, the marking is nearly done. I hope to do a couple more today, which means one or two will slip over into tomorrow, but that will be OK.

I will be sooooo glad to get to the end of this intensive deadline period though. I feel that it's been one deadline after another since before Christmas. That's why Little Glass Elephant didn't get to explore further than the front lawn. Or more accurately, why I didn't come up with a more interesting piece of glass to photograph!

A Most Improper Magick by Stephanie Burgis

[Edited to add: For reasons best known to themselves, the publishers have given this a different title in the US where it is called Kat, Incorrigible.]

This was a fun romp. I really liked the main character Kat and the relationship between her and her sisters. The other characters are lively and the whole story dashes along at a great pace. It's a nice mixture of Regency, romance and magic. There were some aspects of the way the small scale family relationships interconnect with much larger and more serious magical issues that reminded me a little of Diana Wynne Jones. There wasn't as much made of the large scale magic as I expected, but this is book one of a series, so perhaps that comes later?

Anyway, thoroughly enjoyable and despite being up to my eyes in deadlines, I gobbled the book up as fast as I could. Of course I'm not the intended reader, neither is it YA it's for younger people. The heroine Kat is 12 and it would suit readers up to that age.

View all my reviews

Just had a terrifically heavy hailstorm. Yes, it is May, but it is the British Isles. :)

Now the weather had returned to innocent mode. Almost cloudless blue sky, with just a couple of tiny fluffy clouds touched with pink by the setting sun.

But this is what it was like not so long ago. You can see the lines made by the hail! Normally you can't photograph rain, but this shows up all too well. 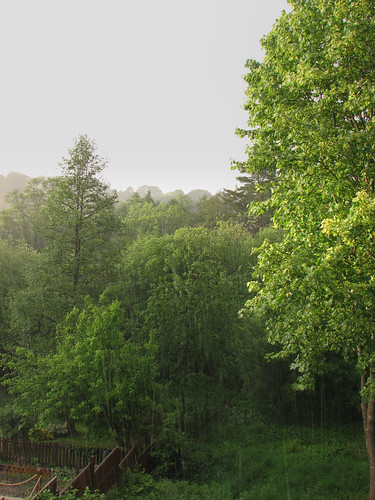