Point reached on journey: We have reached Helm’s Deep. After entering the Hornburg, we have rested and Legolas and Gimli have shown Merry around the Deep. All sorts of exciting things have happened and after consulting with Théoden, Aragorn has decided to take the Paths of the Dead. We are now we are riding out again through Helm's Dyke and down Deeping Coomb.

As you will no doubt have guessed from the photos I posted yesterday, it was one of our trips to Caerleon. We travelled down on Wednesday evening and stayed overnight in the Travelodge in Pontypool.

We drove into Caerleon early because G had meetings all day at the university. After dropping him off, I parked in the university car park and I wandered down the hill. I sat near the Roman Barracks in the sun for a while and started reading Nicola Morgan's Write to be Published. 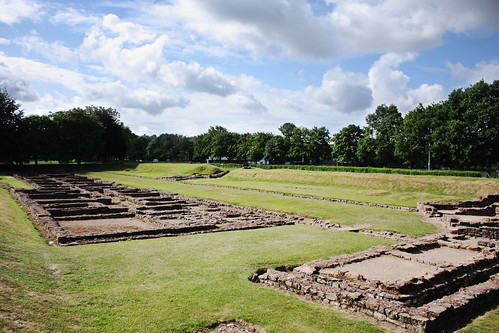 It's not easy to take an interesting photo of the Roman barracks because there is not much left.

Anyway, this gives an idea of the regular layout.

Then, when it clouded over, I wandered back up the hill again and did some work in the car on the Eee. At lunch time I walked back into town and ate at the Baker's shop-cum-cafe which is tucked away down a back street, then wandered around a bit more, visiting the amphitheatre and the museum. We drove home that evening.

Here is another photo from the trip. The gorgeous blue of the delphiniums caught my eye as I was walking down one of the back streets. 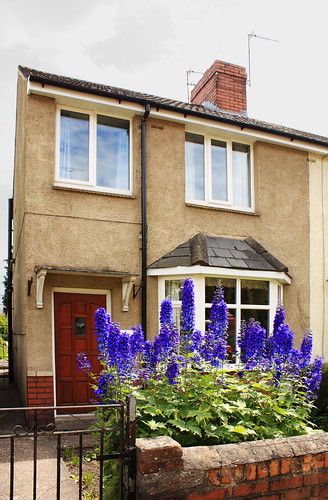 After returning from Caerleon on Thursday evening, the following day (ie yesterday) G was off again to a conference in Leeds where he is giving a paper on teaching maths. Thankfully I had put my foot down and refused to accompany him. Not that there's anything wrong with Leeds, but I am finally starting to catch up from being so behind with work and everything else and a couple of days away would have set me back again. So I just left him at the nearest railway station and I pick him up again tomorrow.

I actually recorded "Misfits" last summer and have only just got around to watching it, but I thought it was brilliant. Very very black, contains very very strong language, lots of sex, but also very very funny. It's about a bunch of young people doing community service for a variety of minor crimes who are given strange powers by a weird storm. They are not the only ones affected and when their probation officer turns into a raving homicidal maniac, they are forced to kill him. It just gets darker and more complicated from then on -- and yet is strangely hilarious. I am sure I am not the right demographic for this show, but I loved the characters, even Nathan, who you want to strangle from the first episode.

I don't recall any of my flist mentioning it, but if you like your humour dark, aren't upset by references to sex or the f-word or the c-word, you could do worse than give it a try. I'm off to start watching season two, which thankfully I also recorded, even though at the point when it started, I hadn't watched any of Season 1.

Of course I'm way behind because I have to wait for it to turn up on Channel 4. It seems that there will be a series three... :)
Collapse