The TV drama "Page Eight" was the Radio Times's pick of the day, though I was a bit underwhelmed with it to be honest. However, there isn't all that much on at the moment to watch and by the time you have discounted all the things G won't watch, we tend to be left with NCIS and re-runs of Midsomer Murders, so at least a brand new drama that isn't a murder mystery makes a change.

I wasn't completely sure whether the young neighbour was supposed to be falling in love with the old intelligence analyst. I prefer to think that she simply helped him out of gratitude for getting the government to do the thing she wanted them to do. I'm afraid that I don't find Bill Nighy (who was playing said old intelligence analyst) attractive me and I do get very tired of the young attractive woman falling for wrinkly old man trope. However, there were occasional moments of sharp dialogue and I managed not to fall asleep, even though I'd worked hard in the morning pulling up Himalayan Balsam plants.

In other news, there's definitely a chill in the air now. I need to buy a convector heater for the upstairs sitting room because it's silly to heat the whole house when we've both retired upstairs to watch TV. At the moment, a blanket around the knees suffices, but it has reached the point in the year when a blanket is necessary and soon a blanket alone won't be enough.

[Because LiveJournal still sometimes seems a bit wobbly, this was posted to Dreamwidth http://heleninwales.dreamwidth.org/5979.html and then crossposted to LJ. If you want to leave a comment, please use whichever site you find most convenient. Comments so far:

For some reason Dreamwidth won't remember who I am and I have to log in every time, despite ticking the "Remember me" box. LJ, Flickr, Blogger etc are all fine, so why is Dreamwidth forgetting who I am?

[Because LiveJournal still sometimes seems a bit wobbly, this was posted to Dreamwidth http://heleninwales.dreamwidth.org/6341.html and then crossposted to LJ. If you want to leave a comment, please use whichever site you find most convenient. Comments so far:

I've been a bit slow getting the photos sorted out from the last mini-break, but here, finally, is Day 2 part 1.

We spent the night in Y Beuno a pub/hotel/restaurant which had excellent rooms and very good food. After a delicious full cooked breakfast (which I only ever eat when away on holiday!), I insisted that we toddle over the road to look at the local church.

The thing I really like about the old Welsh churches is that whereas a church called St John's in England will have no real connection whatsoever with the historical St John (other than someone at some time deciding that it would be a good idea to dedicate the church to him), the Celtic saints actually founded the churches that now bear their name over a thousand years later. So the original St Beuno's church was founded by a chap called Beuno. Unfortunately, according to the information I found, his church was burned first by the Vikings and later by the Normans, but the current 16th century church is very splendid indeed. In fact far too splendid for a village consisting of about a dozen houses. I don't know where the congregation came from. Anyway, here is it. 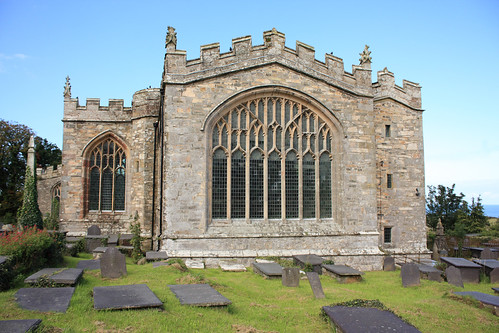 And this is the interior... 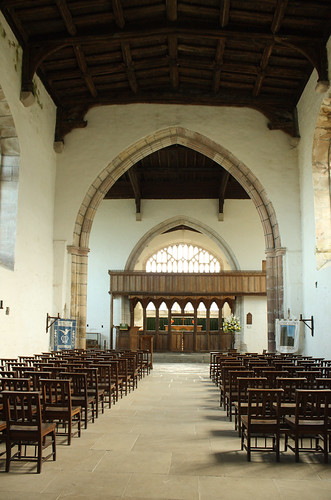 I'll include a few more photos of the items to be found inside, including a medieval alms chest and a freestanding organ, but I had to feature this curious item. 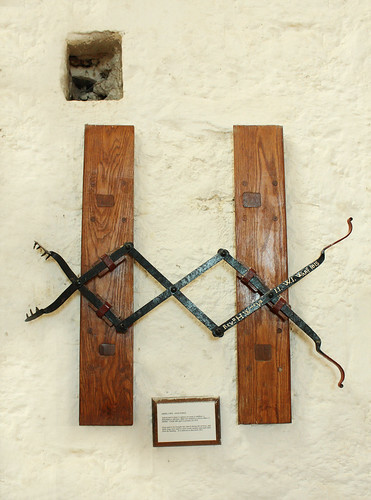 These were the dog removing tongs! The text on the little sign says:

Dogs used to be brought into church during the services, and these tongs were used to catch rowdy animals and expel them from the building. It is believed to date from 1815.

This was definitely one of the nicest and most interesting churches I have visited for a while.

[Because LiveJournal still sometimes seems a bit wobbly, this was posted to Dreamwidth http://heleninwales.dreamwidth.org/6543.html and then crossposted to LJ. If you want to leave a comment, please use whichever site you find most convenient. Comments so far: