The trip to Cei Ballast (Ballast Island) was very successful. I'll do a fuller write up with more pictures as soon as I can, but I just wanted to post my favourite photo from yesterday. 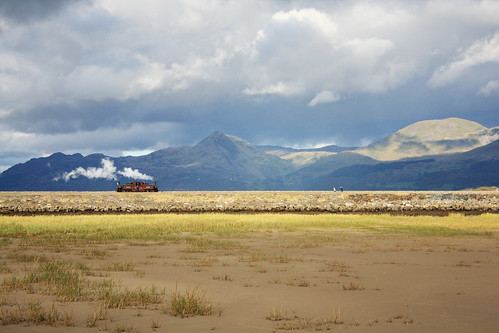 The Double Fairlie is the pushmi-pullyu of the steam engine world. It works equally well in either direction.

Here is a close up. 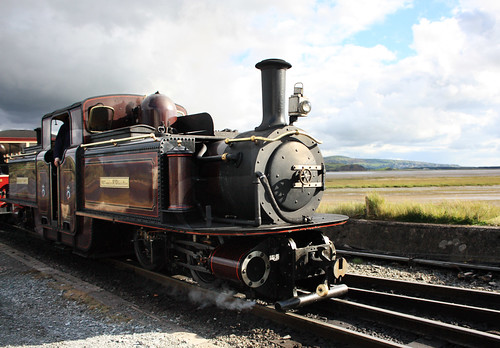 This is probably the same engine because this shot, which was taken about 15 minutes earlier, shows a Double Fairlie hauling the train the other way, about to enter Porthmadog station. The distant shot shows the engine heading towards the Boston Lodge works, presumably because it had hauled the last train of the day.

Though it's extremely fuzzy, even when enlarged to full size, the name plate must read Myrddin Emrys, which is the oldest of the three Ffestiniog Double Fairlies. The other engines are The Earl of Meirioneth and David Lloyd George and the name of the engine in the photo only has two words in it. QED! All three engines were built at the Boston Lodge works, but Myrddin Emrys was built in 1879 whilst the other two were built in 1979 and 1992 respectively.

[LiveJournal is occasionally a bit wobbly so this was posted to Dreamwidth http://heleninwales.dreamwidth.org/10843.html and then crossposted to LJ. If you want to leave a comment, please use whichever site you find most convenient. Comments so far: