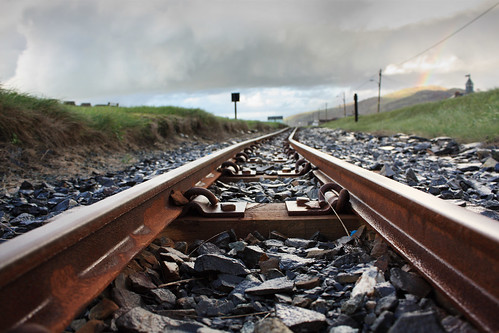 Converging lines, a photo by Helen in Wales on Flickr.

This week's theme was: Converging lines.

Here we have a classic converging railway lines shot -- apart from the fact that you can see from the size of the track ballast that it's a miniature railway! :)

The remnants of a rainbow can be see on the hill on the right.

I'm supposed to be taking part in Novel in 90, but so far all I've done is decide on the project and copy and paste the three already written chapters scene-by-scene into yWriter. There is still time to get some words today, however, if I get my mind into gear.

Exercise also slipped over the past few days, but today was better. For the past week or so I have been using bigger stones as weights during my 10 minute sessions of mini-biking and arm waving. Also the hooping is coming along slowly but surely. Hooping round the waist is a doddle and I have mastered the turning while hooping. The only limit now on the number of revolutions is the point at which I start to feel dizzy! :) Chest hooping (with the hoop under the arms) is pretty reliable and I think I look less like the demented Kermit (as seen is user icons). I am also working on chest hooping with the arms inside the hoop. Still absolutely no joy with hooping around the knees.

In a bid to find a place where I can practice the hoop moves that involve raising the hoop above one's head, I have started work on clearing the garage. Outside in the garden is a) too public and b) too likely to be wet, especially at this time of year. In addition to the successful trip to the recycling centre the other week, I have managed to Freecycle a small roll of roofing felt, though no one wanted the office table. Next move is to try putting some of the grey shelving on Ebay. Clearing The Garage is something I've been trying to do for years, but lack of real motivation meant the project kept stalling. This time I have a reason and I've formulated a Plan of Action, so let's see if I actually manage it this time.

Study: I have embarked on the OU's Children's Literature course, which is proving challenging but interesting. The first essay on what the history of fairy tales could tell us about the history of childhood has been written and submitted. I await my marks with some trepidation. The AS-level maths class is fun and I'm doing better than I expected. My fellow students are mostly lecturers in the college's construction department, so we're all adults and for the first time for ages, I'm back in a class that is mostly male. Regarding the Welsh, our tutor has just dropped the bombshell that she has given in her notice at the college. She has said that she will continue with our class on a private basis, but we will have to see. I mustn't let this stop me progressing, however, so I need to work out ways of learning on my own.

Finally, here is a photo I took the other day when I drove to Fairbourne to drop off the aforementioned small roll of roofing felt. I normally expect people to collect stuff, but they couldn't make it into town until Saturday and I reasoned that as I would have had to drive it to the recycling centre, I may as well take it too them and perhaps get a couple of photos for the photo-a-week theme. What I didn't expect was a rainbow! :) 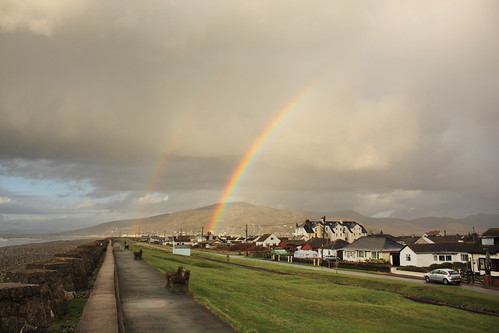 [Cross-posted from Dreamwidth by way of a backup http://heleninwales.dreamwidth.org/16514.html. If you want to leave a comment, please use whichever site you find most convenient. Comments so far: