I'm not going to do any of the end of year retrospectives that are going round because I want to look forward not back. Not that there was anything particularly wrong with 2011, in fact in many respects it was a good year. I successfully completed the BA Education degree by writing up the first substantial piece of original research I have ever done and we had a couple of happy family occasions (Dad's 90th birthday and our grandson's christening). G decided not to take early retirement, so life carried on much as usual and we didn't have a sudden drastic fall in our income, the prospect of which had been worrying me considerably at the end of 2010.

However, as I said, something has clicked in my brain and I finally feel like experimenting with new projects. (Ideas for self-employment will be amongst them.) Finishing the degree was probably the biggest factor, but though that happened in June, it took some time for my brain to recover after writing the dissertation and it's taken this long for creative ideas to begin stirring again. I am still doing the OU course (EA300 Children's Literature), but I'm an old hand at OU and don't usually have a problem fitting the study and essays in around other things. I'm now well into the last big module and I have something interesting but less challenging lined up for next year, which will give me enough points to finish the honours.[*]

I have said many times here that I don't do New Year resolutions and in the past I have set my annual goals during April, however, this year, as a slight variation, I have set myself 12 challenges.

I'm not going to list them all here because it would be tedious, but I will introduce them here one or two at at time over the coming year. It's not one a month, by the way. Basically I have set myself 4 physical challenges, 4 intellectual challenges and 4 creative challenges. Some should be attainable fairly quickly, a couple will take all year and the rest should fit somewhere in between.

I have done numbers 1) and 3) before, but it's at least 3 years since I ran that distance (a running habit that fizzled out not long afterwards) and 7 years since I climbed Cadair. Also, just to make it more of a challenge, I intend to set out on foot from our house, which means that I will climb over 850 metres rather than starting at the car park which reduces the actual climb to a mere 600 metres.

Cycling to Barmouth would be a first and the hooping is a totally new activity.

So there we are. At the moment, the plan is to slowly and steadily work on increasing my fitness and then when the weather improves from April onwards, I will attempt some of the challenges.

[*] And then I will not do any more OU courses after that! I mean, it's getting silly and makes it look like I'm overcompensating for failing the first degree I attempted as a youngster. In fact the second degree (BA Ed) was so I could refresh my teaching skills and get up to date with what is current in education and training after being made redundant, and the third one just sort of happened when I realised that doing random interesting OU modules over the past 12 or so years had given me a substantial number of points. It just seemed silly not to complete, especially as I can do courses free as a tutor. :)

[Cross-posted from Dreamwidth by way of a backup http://heleninwales.dreamwidth.org/23807.html. If you want to leave a comment, please use whichever site you find most convenient. Comments so far: 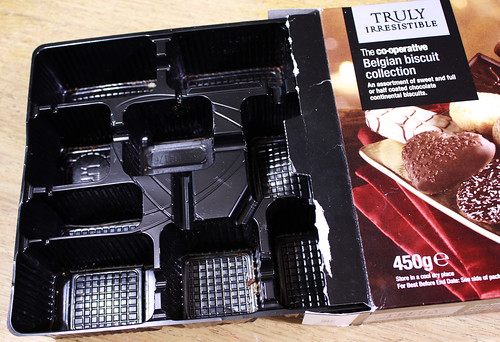 All gone!, a photo by Helen in Wales on Flickr.

And so Christmas is over, the festive food is all eaten and this year's 52 week challenge is successfully completed!