Of course we all know already how good LJ is as a combined blog/social network, but here the BBC explains to everyone else what LJ is, the strengths of the site and how Russian bloggers took to LiveJournal and made it their primary blogging platform.

[Cross-posted from Dreamwidth by way of a backup http://heleninwales.dreamwidth.org/32532.html. If you want to leave a comment, please use whichever site you find most convenient. Comments so far: 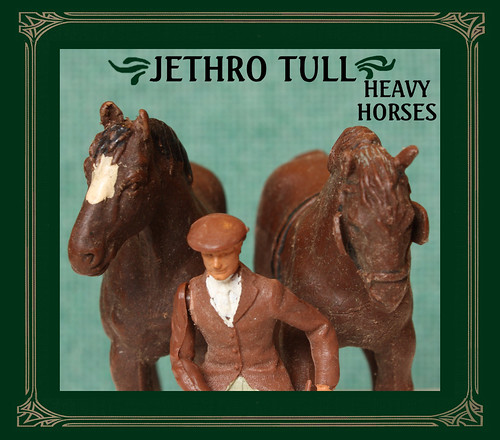 Heavy Horses by Jethro Tull, a photo by Helen in Wales on Flickr.

This week's theme: Interpretation of a cd or album cover

This was definitely not an easy one! So many of my CDs (and LPs!) have artwork rather than photos on the cover, and those that do have photos were not exactly easy to reproduce. But then I had the idea for this.

Here is the original for comparison... I have to admit that I did cheat slightly and scan the fancy border, but all the rest is mine own.

The models are some of my old Britains horses. These were some of my favourite toys when I was small and I used to play for hours acting out stories with them.

We didn't actually have the AS-level maths class last night because only one other student turned up. This was partly due to the fact that we'd had to change the night because G had to go to a meeting in Bangor on our usual Tuesday night.

Anyway, while we were waiting around in the construction department to see who would turn up, we discovered that they had all sorts of activities planned for today. Firstly it is World Book Day as well as Saint David's day, so there was a display of Welsh books I could browse while waiting. :) One by Bethan Gwanas looked interesting, called Gwrach y Gwyllt it seems to be based on a local legend about a witch. As I wrote a short story based on the same legend (didn't sell), I couldn't resist ordering it as soon as I got home. I'm interested to see what she has done with it.

Secondly, they were doing their own version of Gareth Malone's "Choir" project by getting someone to come in and get the construction lads singing. They didn't do too badly. Here they are on Youtube singing the Welsh national anthem.

[Cross-posted from Dreamwidth by way of a backup http://heleninwales.dreamwidth.org/33066.html. If you want to leave a comment, please use whichever site you find most convenient. Comments so far: