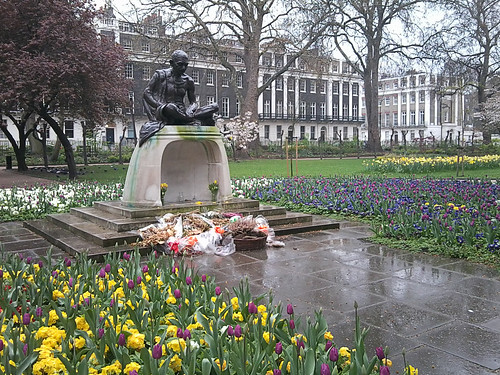 Ghandi statue (enhanced), a photo by Helen in Wales on Flickr.

This week's theme: H is for High Pass Filter

I do love the way this group gives challenges that mix the technical with the artistic!

Quite by chance, one of the photos I took in London at the weekend is perfect for this treatment. I was heading to Russell Square tube station and noticed that the gates were open on the garden in the middle of Tavistock Square, so instead of walking round, I walked through the gardens themselves. This statue of Ghandi caught my eye, particularly as people had been laying flowers there.

I had deliberately not taken a camera because I was spending most of the weekend in the British SF convention, but I couldn't resist taking this shot with my phone. As the quality of photos taken with the phone doesn't match the sharpness of the DSLR, I used the High Pass Filter to sharpen it a little.

The original, straight out of camera shot is behind the cut. ( Collapse )

The adjustment is very subtle, but the detail of the flowers and buildings is just a little crisper. 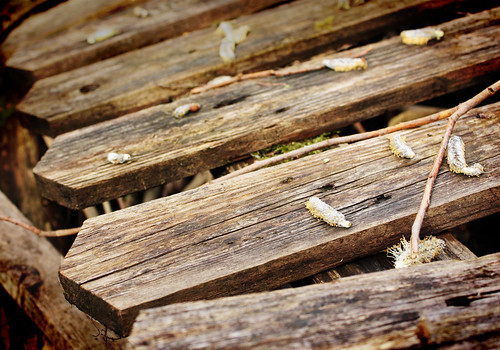 Old fence, a photo by Helen in Wales on Flickr.

This old, rotting fence lies beyond the bottom of our garden on the area we call The Swamp. The twig and pussy willows must have been brought down by the recent heavy rain.

Point reached on journey: We are zig-zagging up an open mountainside to a steep-cut ridge crest.

I walked Brith round our usual 4½ mile circuit. He was very excited when I turned up because I missed our Friday walk due to being away and I'm not sure that the trainer has been either. So there was lots of excited barking and a bit of pulling, but he did settle and we actually passed a couple of dogs without any reaction. The first was an old collie that was too busy sniffing at something in its garden that it didn't even see us and the other was a sheep dog working in a field with a couple of farmers. Brith did lunge and bark at a Landrover and also reacted to a terrier in a car when the driver stopped to ask me the way to the Precipice Walk car park, but Brith only barked once and didn't get hysterical, so that's an improvement.

There were a couple of humorous moments when he thought there might be dogs, but it turned out there weren't. The first was when we caught up with a couple walking slowly, and to be honest I thought they had a small dog with them, but it turned out they didn't, so the animal I saw near them must have actually been a lamb on the other side of the fence. Then a bit further along the lane Brith thought that the BT Openreach man might have had a dog in his van, but he relaxed the moment he saw this wasn't the case.

He did a lot of leaping and barking at the bouncy barky black Labradors (loose in a garden), but I don't think it's going to be possible to stop him doing that because they bark and bounce at everyone and everything that passes by. However, he did settle more quickly once we were past them, so I'm hoping that my tactic of treating him on the approach to their house and treating him again the moment he stops barking and is calm will help.

Otherwise, we were lucky and managed to dodge the heavy rain. Mostly it's been cloudy, but this afternoon I couldn't resist photographing our neighbours flowering tree against a patch of blue sky. 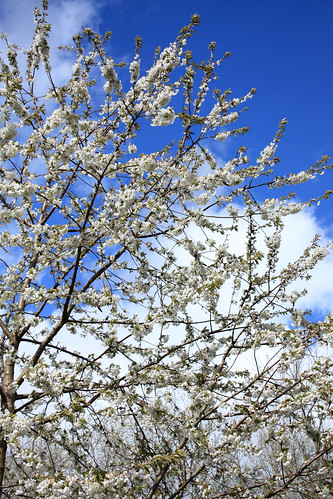 [Cross-posted from Dreamwidth by way of a backup http://heleninwales.dreamwidth.org/39221.html. If you want to leave a comment, please use whichever site you find most convenient. Comments so far: