I don't usually post anything newsworthy on my LJ, but the Olympic torch passed through town just over an hour ago. I am completely underwhelmed by the whole Olympics hooha, but as it was only 5 minutes walk away and I had nothing better to do, I toddled along to watch it go by.

It was difficult to get good shots because the torch-bearer was hemmed in by support vehicles. Also, after a long procession of sponsored vehicles,whose purpose was rather difficult to define, the actual torch went by in what seemed like seconds.

However, everyone was in a good mood. The sun shone and it was a happy occasion. 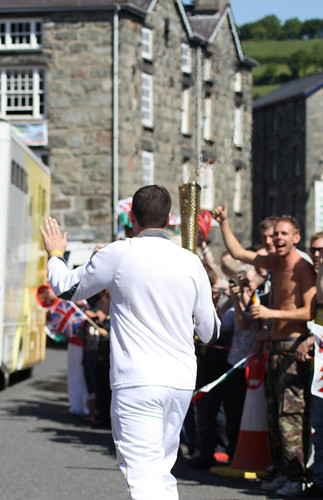 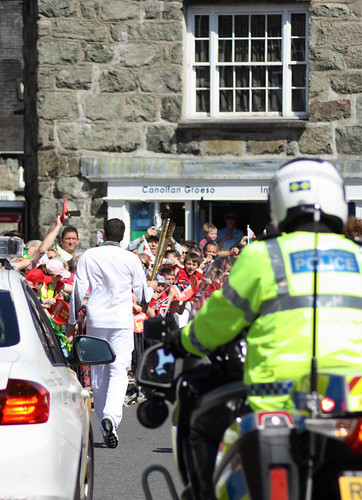 Unfortunately, the bright sunshine made it look rather as though the runner had come out in his pyjamas! 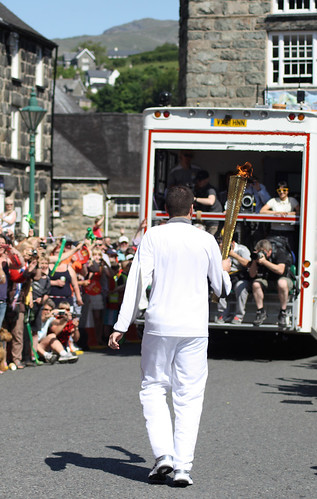 [Cross-posted from Dreamwidth by way of a backup http://heleninwales.dreamwidth.org/44919.html. If you want to leave a comment, please use whichever site you find most convenient. Comments so far:

Fortunately, it was a glorious sunny day for the torch relay through town. Normally the Welsh weather gods arrange an overcast grey sky and a steady drizzle for such occasions. There was a carnival atmosphere and from the size of the crowd and fact that cars were parked along the road as far as our house, people must have come from miles around. In fact I think I heard one woman say she and her friend had come from Chester. ( Collapse ) 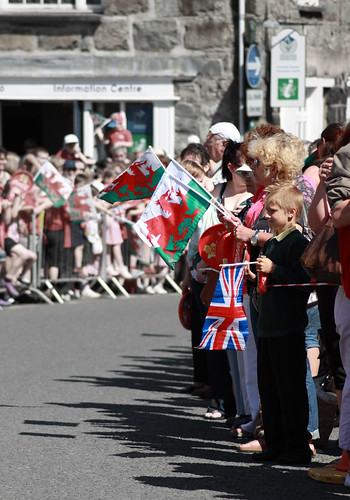 The crowd waited patiently for the flame. It wasn't as well organised as it could be. First lots of police came through on motorbikes, with the Torch relay buses. Then came the sponsored vehicles from Coca-Cola, Samsung and some bank or other, all carrying young people trying to whip up enthusiasm. And then, just as we were all expecting the runner with the flame ... we got a string of ordinary cars and vans that the police must have decided to allow through. They must have been a bit startled to find crowds waving flags to greet them. One motorcyclist played up to the crowd, waving graciously as he rode through.

Then we waited a bit more... 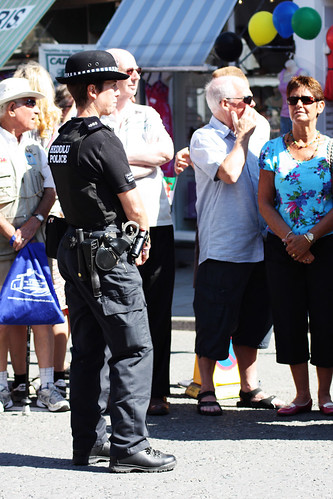 And then it arrived ... and was gone! Just like that.

If I'd only thought to go into town on my bike and leave it handy, I might just have caught the torch again. As it was, I walked/jogged back past our house, over the bridge to the college and just caught a glimpse of the woman who had carried the torch on the second leg through town getting on to the bus with it. Didn't get a shot though and here is the bus about to drive on to the next town. That's where our neighbours' daughter's husband will actually be carrying it. (How about that for a tenuous connection?)

[Cross-posted from Dreamwidth by way of a backup http://heleninwales.dreamwidth.org/45119.html. If you want to leave a comment, please use whichever site you find most convenient. Comments so far: