I seem to be suffering from the usual problem: when I have time to blog, that means I'm not doing anything interesting, and if I am getting out and about, I struggle to process photos and write something in a timely fashion.

Anyway... Last Saturday G was leading another geology field trip, this time for the U3A group. He'd covered the theory during his last talk, so the plan was to go and look at the rocks in the wild.

As they are based further north than us, the selected sites were relatively local for them, but a 1½ hour drive for us. However, it's not school holidays yet and the Porthmadog bypass has greatly speeded up the journey to the Lleyn so we actually arrived at the first location (Nefyn) early. I only listen to the geology with half an ear, but all the coastline is particularly beautiful in that part of Wales. Nefyn itself is like something out of an Enid Blyton adventure, with cliffs surrounding a pretty bay and a steep winding lane leading down to the beach. We walked the length of the beach to scramble around on the interesting rock, where I watched the oyster catchers and gannets. We also saw a huge dead spider crab. I didn't photograph this and the gannets came out blurry because they were too far away and moving too fast as they soared and swooped over the sea.

Further along the coast, I did take a couple of photos at Porth Oer (Cold Port), also known as Whistling Sands. This rather zen garden-like arrangement of rocks caught my eye, as did the numerous surfers paddling out into the bay on their boards. 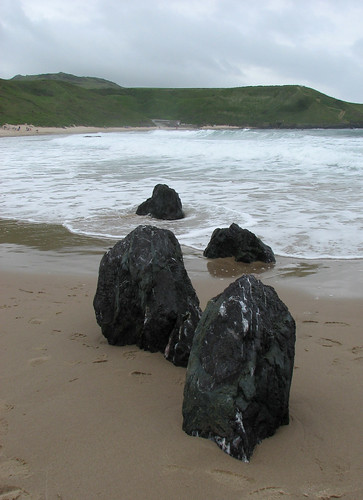 Tried several shots of the surfers, but this was the only decent one. 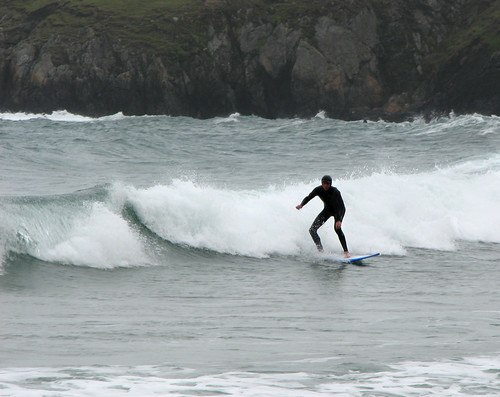 We finished up right at the end of the Lleyn Peninsula, overlooking Ynys Enlli (Bardsey Island). One day I want to actually visit the island which is an ancient site of pilgrimage. It used to be thought that three pilgrimages to Bardsey equalled one to Rome.

In the next post, I will explain why Porth Oer gained the name Whistling Sands...

[Cross-posted from Dreamwidth by way of a backup http://heleninwales.dreamwidth.org/49118.html. If you want to leave a comment, please use whichever site you find most convenient. Comments so far:

The first time I visited Porth Oer, aka Whistling Sands, I was sceptical about the whistling. It's nothing to do with the wind, which might be your first thought on hearing the name. It's the actual sand that does the whistling.

Whether the sand obliges seems to depend on certain factors, in particular whether it's wet or not. To make it whistle, it needs to be dry. If the conditions are right and you swish your feet over the surface, you will hear it whistle. Or perhaps it's better described as a squeak? However, Squeaking Sands, though probably more accurate, doesn't sound so good as Whistling Sands. :)

This time I tried taking a video so that I could record the squeaking/whistling sound.

Apologies for the quality, it's just taken with my Canon PowerShot which isn't a video camera, it just has a video option.

While I was taking videos, I also recorded the surf crashing onto the beach. You can hear the wind too. If you look carefully near the end, you will see the small black shape of a surfer heading for the beach.

[Cross-posted from Dreamwidth by way of a backup http://heleninwales.dreamwidth.org/49328.html. If you want to leave a comment, please use whichever site you find most convenient. Comments so far: