The other week I mentioned the 12 challenges I'd set myself for 2012. Some are physical, some intellectual and some creative. I've achieved two of the intellectual challenges and can now tick one off the physical list.

In an ideal world, the Sunday of the Bank Holiday weekend would not be the day I would pick for this venture, but needs must where the devil weather drives. According to the forecast, Sunday was going to be an isolated fine day in the middle of some pretty horrible weather, so Sunday it had to be. The alternative was to wait several more weeks because the next two weekends are taken up with other things and during the week, other than Mondays, I'm either walking Brith or have other commitments.

It was a bit of a gamble, seeing as I've only been out on the bike once this year and I was about to tackle the longest ride I've ever done. I really wouldn't recommend that approach, but I knew that the cardio fitness was fine and I was hoping that all the climbing of steps we did in Korea would have toned the right leg muscles. That did turn out to be the case and though I was achy and tired afterwards, by this morning only my arms and shoulders were stiff. I hadn't thought about which arm muscles you use when cycling!

The outward journey was a bit of a nightmare because it must have been the busiest day of the year on the Mawddach Trail. The one fine day of the August Bank Holiday weekend meant that, especially at the start, it was swarming with walkers and cyclists. At least it meant that the walkers were looking out for cyclists. At quiet times, they straggle across the path without a thought for anyone travelling faster than them. Also watching out for dogs with a death wish and small children weaving from side to side looking down at their front wheel rather than where they were going prevented me from getting bored.

Now for some pictures...

I paused about 2 miles from home to photograph the George III hotel, which is a very popular pub and absolutely heaving with people. On the left, you can just see the old signals showing that this was once a railway line. 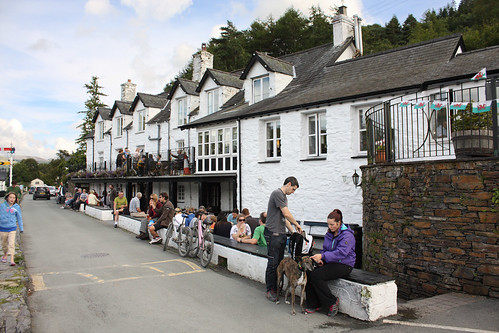 And here is my destination, the sunny seaside resort of Barmouth. It was very busy, so I locked the bike to a bench on the sea front and went and bought an ice cream at this cafe. It was good to sit and relax and watch everyone having fun on an all too brief sunny day. 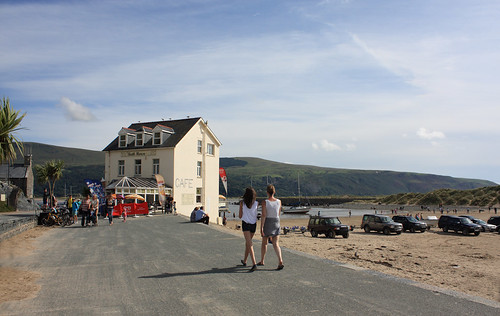 Then I had to get back on the bike and head for home. Despite being tired, I knocked at least 30 minutes off the return journey because by now the crowds had thinned as people set off for home or returned to their hotel or cottage for the night.

So, mission accomplished and I'm so glad I took the chance and just did it. Today has been foul with high winds and torrential rain, but after all the exercise yesterday, I haven't felt at all guilty just lounging about doing not very much.

[Cross-posted from Dreamwidth by way of a backup http://heleninwales.dreamwidth.org/59679.html. If you want to leave a comment, please use whichever site you find most convenient. Comments so far: