I was horrified to see the new Flickr design. All the images just crammed together as though you had tipped a box of snapshots out onto the table and the font has got tinier.

Why is it that the older I get the smaller the text becomes? I know the resolution of the new screens is much better, but that still doesn't mean that I want everything in the equivalent of 8 point.

I am seriously going to have to look into how to alter setting, but then usually if you do that, it messes up the display.

Also, there isn't going to be a sensible way to keep my Flickr use ad-free. I pay for a "Pro" account and have done since I started on Flickr about 5 years ago, but they're doubling the price and the only benefit is not seeing adverts.

After the traumatic start to the day caused by the totally unexpected Flickr makeover, the day improved considerably. I had a lovely walk with Brith, despite having to pass the aggressive black Labradors and a digger and dumper truck that almost entirely blocked the lane.

Usually we do an out-and-back walk, but there is also the circular option and because I knew I had enough time, I decided that going round was preferable to having to squeeze back past the road works and once again brave the aggressive black Labradors. So we went on round.

This did mean passing a little farm dog, but for some reason Brith isn't too bothered by that dog. It does bark, but the bark sounds more like, "I can see you! I know you're there!" rather than the Labradors', "Aaaargh! We hates you we does! And if we ever catch you we'll tear you to pieces!"

I don't think the circular walk in any longer in terms of miles measured on the map (both work out at about 3 miles), but it is much more strenuous because it involves descending steeply to river level and then climbing even more steeply to regain all the lost height. Anyway, we were both suitably exercised and, because the weather is finally getting warmer, we were both glad of the water I was carrying. (I have a collapsible canvas bowl for Brith to drink out of.)

The wild garlic is out and smelling very garlicky. I wonder if that's why, as I was wandering around the Co-op later in the day, I suddenly fancied garlic bread for dinner! :) 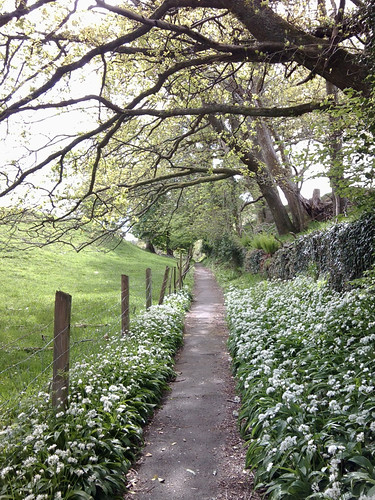