As I said in my last post, the promised wifi didn't stretch to the hall of residence and as I didn't want to sit in reception in the main building in order to use the internet, I stuck to using the mobile broadband dongle. It's fine, but obviously slower and you pay by the amount of data downloaded, so though I'd uploaded photos directly from my phone, I didn't want to spend much time on Flickr with it's new bandwidth hungry design.

So here are the photos I took on Wednesday when I went exploring Newport, which is a city that has sadly declined a lot since it's Victorian heyday, but which has still not quite given up the fight to stay alive. There were lots of handsome Victorian buildings, now mostly empty and in various stages of dereliction. However, the leaflet included with G's conference pack mentioned the Indoor Provisions Market. Built in 1887 it is an early example of a large-span cast iron frame building.

I didn't fancy driving into Newport because I was afraid that without a navigator I'd never find my way round the complex one-way system to find a car park and, even if I did, I'd probably never find my way back to Caerleon afterwards. Besides, there is a frequent bus service between Caerleon and Newport City Centre and the return fare turned out to be a mere £3, which is probably not far off what I'd have had to pay for car parking anyway.

So, disembarking at the bus station, I set out in search of the market. There were plenty of signposts for tourists, which is probably hugely optimistic -- that tourists would go there, I mean -- but as I said, Newport isn't giving up easily. So I followed the signs until they stopped, presumably indicating that I had reached the right place, but looking around, there was nothing that looked at all like a large Indoor Provisions Market. So I circled around and tried again by a slightly different route.

The approach didn't look too promising. All the shops on this arcade seemed closed apart from a tattoo parlour. 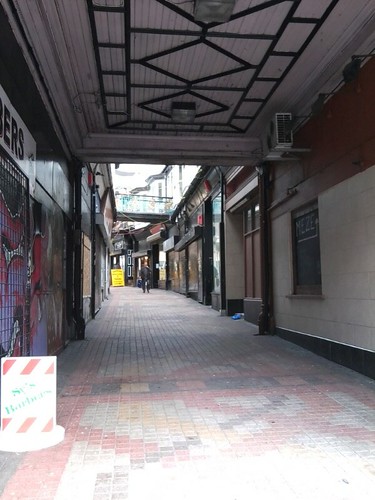