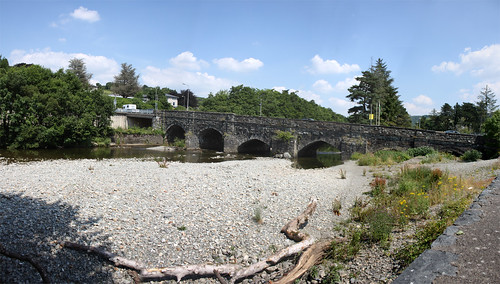 Bont Fawr, Dolgellau, a photo by Helen in Wales on Flickr.

The set theme was: O is for Obstruction

I went out yesterday to photograph river gravel for my husband. A huge amount has accumulated by the bridge in town, totally obstructing a couple of the arches and starting to fill the others. Believe it or not, when the river is in flood, it comes almost to the top of the wall at the bottom right.

This is a panorama made out of 4 photos.

Apologies, by the way for lack of posting. I really haven't been doing anything very interesting, though I ought to do a quick catch up post, as much for my own reference as anything. 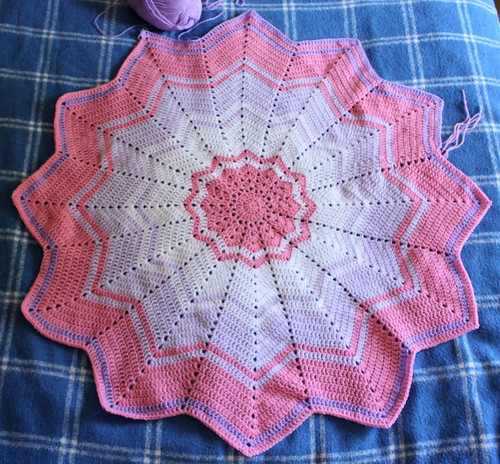 Rainbow ripple crochet blanket WIP, a photo by Helen in Wales on Flickr.

The words "too" and "hot" don't often feature in a sentence describing Welsh weather -- not even in the summer. According to the radio news, it's been seven years since we had temperatures like this for more than the odd, isolated day. Anyway, I refuse to complain about it because a decent summer has been a long time coming and it might be another seven years before we get another one! It should really boost our tourist trade and help the local hotels, restaurants and cafes.

Meanwhile the crocheting problem I've been having is that it's too hot to do much work on the main WIP, namely the rainbow ripple I'm making as one of the Christmas presents for family. (Yes, I know Christmas is a long way off, but I'm not a fast crocheter and I have quite a few things I want to make this year.)

It's coming along well, especially as I only started it just over a week ago.

The occasional round is just about manageable by resting the bulk of the blanket on the keyboard shelf of the computer desk, where I sit in front of the open window with a slightly cross-draft created by opening the window on the landing. But handling so much crocheted blanket eventually gets too much, so I have also been doing some work on another WIP. ( Collapse )
This project can take as long as it likes because it's just a blanket for me to keep in the car. I intend to use on picnics or if I have to sit waiting for my husband on cold days. I've been popping all the remnants of yarn used for other projects into these storage jars and whenever I get a moment, I'm making these simple filet crochet starburst squares.