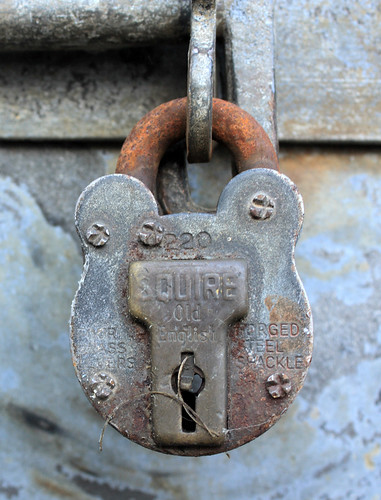 Padlock keyhole, a photo by Helen in Wales on Flickr.

This week's theme was: K is for Keyhole

To be honest, this keyhole in a padlock on an old barn looks pretty gunged up. I have no idea whether you'd actually be able to unlock it. It would certainly need a bit of a clean and a squirt of oil.

Also, I just thought I'd mention that a few minutes ago, when I came to post this photo from Flickr, I received this message.

"We are deprecating the support for sharing to LiveJournal on 3/25."

*Sigh!* I know that LiveJournal is no longer as popular as it once was and I know that I can copy and paste the HTML, but it was so convenient being able to post direct from Flickr.

I went to the relevant thread in the Flickr forum and left a message saying how sad I was that such a useful feature was being discontinued.

I also pointed out that "deprecate" doesn't mean what they seem to think it means. What the message should have said was "We are terminating the support for sharing to LiveJournal on 3/25." They've obviously been deprecating it for ages, ie (according to my dictionary) arguing or protesting against it.
Collapse