1. The thing that the next-door-but-one neighbour is building in his back garden is not a greenhouse, as I first thought, but a giant shed. He has started putting the roof on this morning. It really is huge for a garden shed. It's almost big enough to get a small car in. Assuming, that is, that the door had been made large enough. And also assuming that it was actually possible to get a car round the side of the house -- which it isn't.

2. It's Mother's Day tomorrow in the UK and my daughter sent chocolates. I have no willpower and succumbed and opened them last night. (It has been a stressful couple of weeks and I needed chocolate.) But this newfangled thing about putting salt in chocolate? Do not like. :( Fortunately only two types contain salted nuts.

3. I need to get a better light in my study-cum-workroom. I'd sewed the faces and eyes on the Easter bunnies yesterday evening. When I looked this morning, I'd put one little bunny face on the wrong side. All sorted out now, but very irritating.

4. The trees on the swamp beyond the bottom of our garden are all busy having sex. I have finally been forced to admit that I am allergic to tree pollen. I keep sneezing and my eyes feel hot and sticky.

5. And finally, (via a post on Twitter) another Amazon review thread has gone rogue :) You might like to read the reviews of this LoTR ring, which had been described as "Tengwar Script Men's Lord Prayer Ring Comfort Fit Black IP Stainless Steel Size 9 10 11 12 13"

An example of what people are saying:

"Not what I expected

I bought this as a prayer ring for reciting the Lord's Prayer before bed, as you do. But when I put it on and read the words out loud, I found myself standing at the food of a large tower, staring up at a flaming eye. God doesn't look like I thought He would. I'm still giving this three stars though, because the script is pretty."

Read all the reviews here...

This week's theme was: M is for Macro 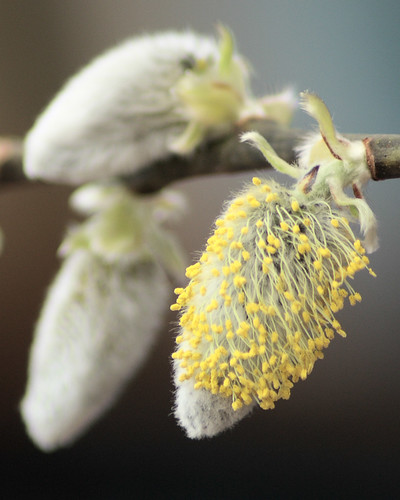 I'm not entirely happy with this photo. The focus is a smidgen soft. I could have done with brighter light to reduce the shutter speed. As it was, I only managed a couple of shots that were in focus. My tripod isn't really heavy enough to hold the camera perfectly still when it has the big zoom/macro lens on it.

Anyway, spring is definitely starting to spring and the trees are all busy throwing out catkins and filling the air with pollen -- which is making me sneeze!

I saw the first bumblebee of the year yesterday while I was out walking Brith.

I have removed all the grass that had, over the past few years, sneakily spread onto the concrete path at the front of our house. I found an edging tool in the garage that I didn't remember buying or in fact ever seeing before. I eventually decided that, as it was unlikely that it had been left by the gardening fairies, I must have acquired it when we cleared Dad's garage. I must have grabbed it as something useful that we didn't already possess, shoved it in the car, unloaded it when I reached home and then promptly forgotten all about it. Anyway, it was just the thing and cut through the turf, leaving a neat edge. I rolled up the grass and soil and have put it out at the back on the area where I'm trying to make a patio of sorts, where I can sit out if/when the weather is nice.
Collapse