This week's topic was: U is for Useless

These signals are pretty useless now. There haven't been any trains along here since the Beeching axe fell in the 1960s, but the signals and nearby signal box still remain.

For a while the signal box was used as a viewing point for visitors to look at birds. Binoculars were provided free of charge, but sadly it's been closed for some years now. Our kids used to love going there to see the birds out on the estuary. 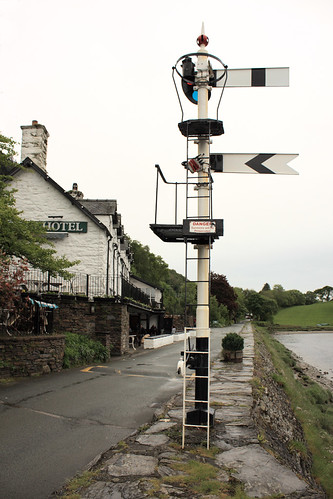 I've been very productive recently and I want to write about the website that is really helping and motivating me, but that will have to wait for another day. However, because today was my birthday, I decided I deserved a total day off. I did some crochet, listened to the radio and read LJ, Facebook and Google+. By about 4 pm, I knew that if I was going to get my photo for the week (deadline today), I would have to venture out into the damp and chill. It had taken some thought to come up with a subject for the theme of "Useless". In one way it's good that I don't have useless things lying around the house; it means that my decluttering efforts have paid off, but I was totally stuck for something to photograph. Eventually my desperate brainstorming hit on the signals on the old railway line, now a cycling and walking trail. So, I had my subject.

I cheated a little and drove to Penmaenpool and parked in the free car park. Then, after photographing the signals, I walked on a little way along the trail before turning back as the rain had become heavier. Total walk about 30 minutes, but it was a nice little break. 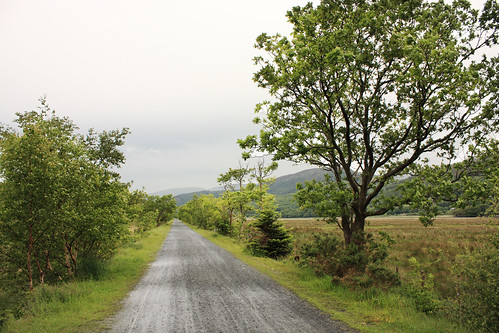 I think of this as the Long Boring Bit. You can get along here quite quickly on a bike, but it's a long plod on foot so this was about the point I turned for home.

Anyway, it's half term holiday next week, so I'll try and get out and about a bit more. My teaching has now finished. The GCSE English re-sit students have their exams the first week of June and then that's it until the end of the summer. It looks like there should be some teaching again next year, then this time next year I'll call it a day and officially retire, along with G. That gives us a year to plan what projects he can do to keep himself amused. I already have plenty, but G's "hobbies" tend to rely on having students available to use as research subjects. But at least we now have a plan, of sorts.
Collapse