Point reached on journey: We are passing the Hamlet of Underharrow where we can see the peaks of Irensaga high above.

As I mentioned last time, Brith only goes for a slow 20 minute walk now, so in order to keep this as a useful exercise session for me I need to travel to and from his house under my own steam. This time I walked and did the next Zombies, run! mission on the way.

I'm still getting used to the app and I discovered that pausing the mission doesn't stop the clock (I paused it while I took Brith out because I need to concentrate on the dog and surroundings), so my average speed per kilometre was rubbish according to the stats. However, I can log another 3 miles on the journey to Minas Tirith.

Actually, Brith was pretty perky, so we walked to the Golf Club and then went on a bit further up a path that previously had been seriously overgrown but must have been cleared recently. It doesn't actually go anywhere, but here's the view from the end, looking out over the golf course. Since the beginning of September, it's been like summer here, but today was definitely chilly and autumnal first thing, though it did warm up later. 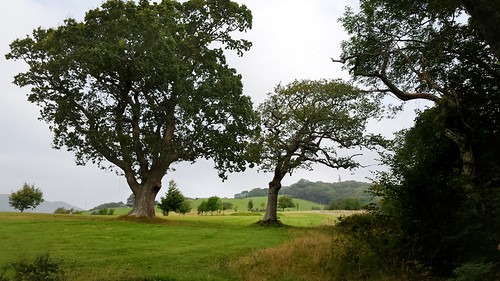