I watched the solar eclipse in Blaenau Ffestiniog in 1999 with my students. Cloud made viewing difficult, but we did manage to see the eclipse using the pinhole projection method. The lasting memory is how grey and weird the light went and how cold it seemed for the rest of the day, as though the sunlight we'd been deprived of for that hour or so had left a warmth deficit.

As I wouldn't be able to take time out of the type of teaching I'm doing now, I was really pleased that today's eclipse fell on a day when I didn't have to work. Here is how it happened in my corner of North Wales.


8:30 am Oooo! The eclipse has started here in the UK. I made a pinhole viewer out of a shoebox and with that I can see that the moon has taken a tiny bite out of the sun.

9:00 am The sun is almost half hidden and the quality of the light has changed. It's noticeable that it's not as bright as it should be for this time of day with an utterly cloudless sky.

9:10 am Just a crescent of sun left now. As I popped out of the front door to take a look at how things were progressing, my neighbour came out carrying a colander and a sheet of paper. I didn't know that was a way of viewing an eclipse, but she said it worked. I will stick with my shoebox.

9:29 am There is just a thin crescent, like a fingernail paring left of the sun. The view of the eclipse from the BBC webcam is deceptive though. The sky is not actually black, it's twilight blue and I've realised that the feeling of strangeness is due to the light being twilightish in terms of quality while the height and angle of the sun tells the brain that it should be bright morning.

9:55 am The light outside is brightening and I just popped out with the pinhole viewer to find that the sun is now a much fatter crescent. Still partially obscured though.

9:58 am Just had a quick look on Facebook and the Habit Tavern and all my online friends are moaning about the non-event due to cloud cover over London, the SE of England and Germany. *Tries not to be smug* For once Welsh weather defied the stereotype to give us perfect viewing conditions. :)

10:06 am The light is almost back to normal now. It's like having a second morning. I think the birds thought that too because there was more random birdsong than is normal for the time of day.

10:22 am Sun almost back to normal. Just a small bite missing.

10:36 am As far as I can see, the moon has moved on and the sun is totally visible again, though the cloud that has now appeared makes it difficult to see. I'm so glad the cloud held off until now. For once the weather gods timed things perfectly!

I was mostly interested in watching the progress of the eclipse and hadn't set things up to enable me to photograph it, but I did quickly try to capture the sun at the eclipse maximum. Here it is... 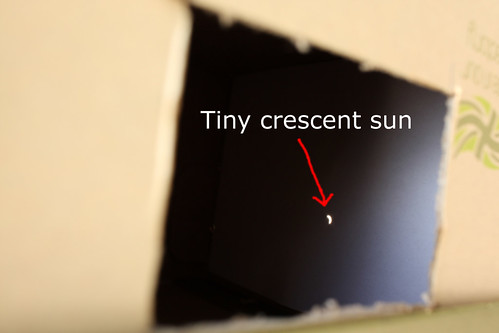 I also tried to photograph the weird gloomy quality to the light. Many of the photos of the eclipse make it seem as though the sky goes black. Here in North Wales the eclipse was only partial (87% or thereabouts) so though the light dimmed, it only went twilightish, not pitch dark. But still strange for that time of day on a cloudless morning. 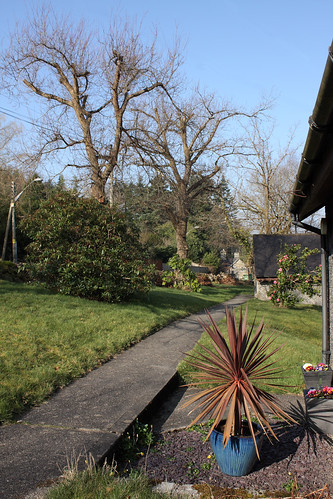