We walked from the hotel, across Tower Bridge to a cafe to have a cup of tea and a bacon bap for breakfast. Suitably sustained, we then walked along the south bank of the Thames along the Thames Path as far as Greenwich.

We've done this walk a few times before, but there's so much building along there that things change and it's interesting to spot what's new. This time there were even more new apartments (heaven knows how much they cost!), new offices and a new sail-like sculture thingy.

Here you can see the skyscrapers of the Docklands financial district in the distance.

And now here they are close up, just the other side of the river. 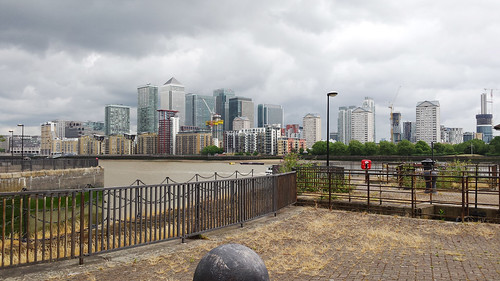 We ate lunch in the Meantime cafe, which is also a microbrewery. It's situated in part of the old Naval College and has quite an extensive menu and sells the Meantime beers that are brewed there. However, we just had the (very nice) tomato and basil soup with ciabatta bread. Everything was a lot quieter than when we've been before, but that was always during the Christmas holidays and though it's summer, the schools had not yet broken up.

By now, I had walked far enough, though G still had energy to spare so we crossed the Thames via the foot tunnel and while I got the DLR (Docklands Light Railway) back to Tower Gateway and thence to the hotel to spend some time enjoying the room and the view from the room, G walked back on the north bank of the Thames.

Once G had rejoined me and relaxed for a while, we set out in search of dinner, which was a decent burger place where we had a satisfactory meal accompanied by some of the Meantime brewery's lager.

Here is the Shard, looking very silvery in the late afternoon light. 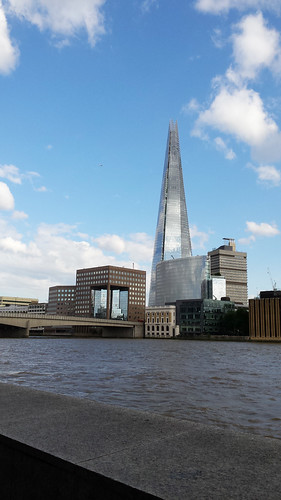