This morning it was time to pack up and set off on the long journey home. Before leaving, the light was perfect for one last shot out of our hotel window. 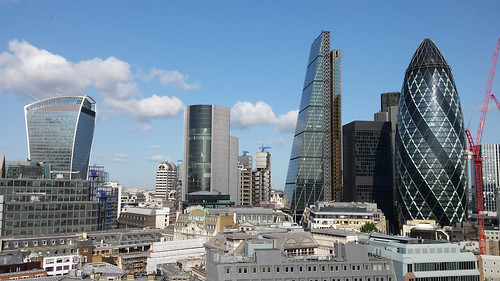 From left to right, the tallest buildings which have nicknames are: Walkie Talkie, Cheese-grater, and The Gherkin. I think the shapes are pretty explanatory.

The journey was made somewhat harder by the Tube strike that started yesterday evening and which is due to end tonight. The London streets were even more chaotic than usual because all the people (including us!) who would normally have been down below on the Tube were struggling to work on packed buses, or fighting the frequently jammed up traffic in cars or on bikes. Yet despite the chaos (which to be fair probably wasn't helped by having road closures and diversions because of the Great City Race) and despite having had a 1 hour 40 minute walk this morning through crowded streets with our luggage, I am totally on the side of the Tube workers. I don't think the night Tube idea has been thought through properly and it certainly shouldn't be launched on 12 September, which is just a matter of weeks away.

Anyway, once at Euston the rest of the journey was fine and there was just enough time at Shrewsbury where we changed trains to grab a hot drink and a sandwich. I'm now home busily catching up online and tomorrow I must do a load of laundry and attack the garden before it gets out of control again.
Collapse