Despite having lived in Wales for 40 years, I had never been to the National Eisteddfod before. This was for various reasons, partly due to lack of time. (For the first 10 years after we moved here, the summer was our busiest time and it was almost impossible to get days off.) Also there was the expense of taking the whole family. And then later, when these things were no longer a problem, I had no one to go with. Also I do have issues with the whole competitive element.

This year I decided that I would put all my reservations to one side and actually go. I bought a ticket in advance while I was still feeling enthusiastic after the Welsh summer school, and it was just as well that I did because on Tuesday morning, it was tipping down with rain. If I hadn't pre-paid, I would definitely not have gone. Thankfully, the forecast said it should dry up later and on the drive there, the rain did indeed ease, so that by the time I reached the Eisteddfod, it was hardly raining at all. My other dread of traffic queues and road congestion proved unfounded as everything was well signed and there was an efficient one-way system and traffic lights to keep traffic flowing smoothly on and off the maes (Welsh for "field" and used to mean the whole Eisteddfod site). The cars were shepherded onto the car park and soon I was entering the Eisteddfod itself.

The distinctive Pink Pavilion (Pafiliwn Pinc) is visible from far afield and proudly proclaims that the Eisteddfod is here! 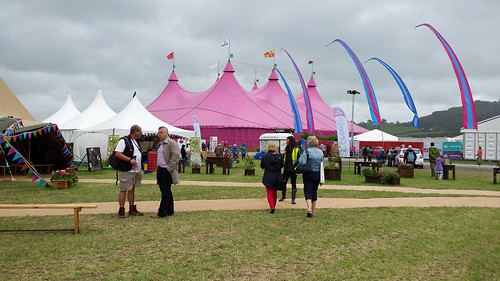 I arrived around 10 am and it was still fairly quiet. I wandered around, looking at all the exhibits. Just about every organisation and sizeable business in Wales must have had a stand there, including universities, colleges, the National Library, the political parties, the voluntary organisations, charities, and pressure groups like CND. After a quick exploration, I watched a demo on cooking lamb. This was actually bilingual, but everything else was Welsh only.

As the day progressed, the crowd increased and after a couple of hours I had seen all the stands and was ready for a sit down. I found a cafe and bought a cup of tea and a ham and salad sandwich. There wasn't much seating, but (in Welsh) I managed to ask a group sitting round a table which had some spare chairs if they needed them all. Chair acquired, I ate my lunch and then ventured out again. I spent an hour or so in the Pafiliwn Pinc listening to the end of a choir competition which was followed by some cerdd dant. 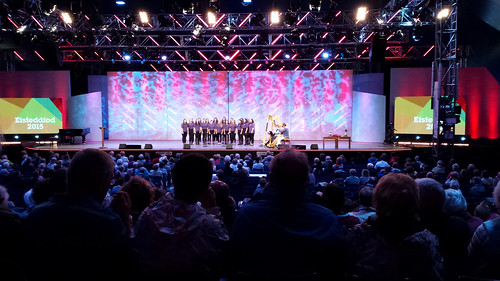 Cerdd dant is an esoteric Welsh art form in which one or more vocalists sing poetry to a harp accompaniment. Here is quite a nice example of a solo by a young girl.

More wandering brought me finally to the Ty Gwerin (lit. "Folk house"), and I remained there for an hour or so listening to folk music followed by an interview with Twm Morys. Then there was just time for an ice cream (with flake) and a final look around before leaving.

And this was where it went wrong. I could not find my car. There were five fields of cars. At least five. All full. And no way to distinguish them. I was cursing myself for not having paid more attention to where I had left it, but to be honest, there were no landmarks in the car parks, seeing as normally they are just flat grassy fields out in the countryside. It took me half a bloody hour of searching and of course I found it in the last field I looked in. And by that I mean I had thoroughly searched all the other fields (some of them twice) until there was only one small field left.

So would I go again? Almost definitely. Would I spend time in the main pavilion again? Possibly, though next time I'll be spending much more time in the folk tent which was much more my cup of tea and didn't involve any competitions.

This walk formed part of my Eowyn challenge journey. I am currently following Frodo and Sam's journey to Mordor and Mount Doom.