Still catching up on writing about our short break in the North during August...

The great thing about Manchester as a city is that it's so easy to escape into the hills. Admittedly the scenery is not as splendid as North Wales (which is where I now live), and it may seem strange to go for a walk in less spectacular hills than one has at home, but this was the scenery I grew up with. The hills are visible even from the centre of the city if you get high enough to be able to see over the surrounding buildings.

First we had to buy train tickets and because of the very long queue, we ventured the self-service ticket machines. I think I've come to the conclusion that getting tickets out of these things is always going to take two tries, either the thing times out while you're dithering over the options (that happened quite a bit with the machines on the Seoul metro until we worked out how to do it as a team with G entering the options and me poised, ready to feed it cash). Or in this case, it decided it didn't like my credit card and so we had to do it all again and use the debit card instead.

I did wonder whether the credit card had been declined due to some sort of algorithm detecting "suspicious activity". That has happened to me before when I'd bought a certain pattern of things online which triggered a phone call from the card company's fraud detection department. But would a mugger (assuming I had been mugged and had my card stolen and the PIN somehow extracted from me)... would a mugger rush to Picadilly Station to buy two return tickets to Glossop for a total of around £8.50? Anyway, I later used my credit card perfectly successfully, so I don't know why this particular machine didn't like it.

It is just a small diesel train that runs out to Glossop through pleasant but not especially exciting countryside. Glossop turned out to be an attractive little town and looked to be thriving. However, we decided not to explore now, but to stop there on the way back and have a light meal. G had downloaded maps from the internet, so we set off on a walk to find the Langdendale reservoirs. 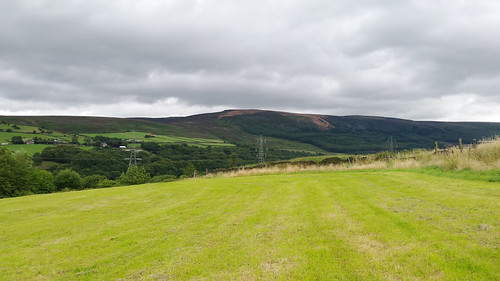 This shot was taken on the footpath where we met a delightful 17-month-old bulldog who, on seeing us, decided that these two strangers looked as though they were off to much more interesting places than just going home with its owner. Every time we tried to walk on, it came rushing after us. If we stood still, it reluctantly moved a little way back towards the owner. In the end, the owner had to put it on the lead and we could finally continue without stealing a cute dog in the process.

By the way, the distant pylons in the photo above became more significant as we walked on towards the reservoirs. There was a lot of work going on related to the power lines and some of the paths were closed, but fortunately none of the ones we intended to take.

Part of the walk around the reservoirs was along an old railway, and the rest of the path was well maintained, easy to find and seemed very popular with local walking groups and dog walkers. The weather could have been better and we got rained on, but it was an interesting circular walk. There are several reservoirs strung out along the valley with dams between. 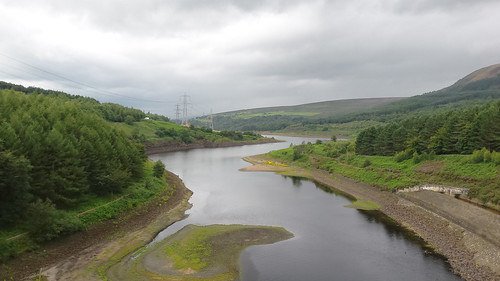 Slightly soggy by now, we walked down into another little town called Hadfield, where we planned to catch the train into Glossop and have something to eat before returning to Manchester. But our plan was foiled by a broken down train at Glossop, which now meant that no more trains could call there. It turned out fortunate that we had not decided to walk the last few miles to Glossop or we'd have been stuck! So we waited in the sunshine (typical changeable British weather) for the train back to Manchester. It was so sunny that the Hadfield station cat was lying flat on the platform, keen to absorb every bit of sun possible during this sunny interval. Shortly after boarding the train, the heavens opened and it tipped down. It was definitely a good thing that we hadn't carried on to walk to Glossop, we would have been drenched as well as stuck.

Back in Manchester we bought food in Waitrose en route to the apartment. (Soup, sandwiches, curry, tiramisu and a bottle of wine.) It was by now around 3 pm, so we had a belated lunch and while G had a nap, I caught up online.
Collapse