As there was nothing to see or do at Traeth Bychan, we got back in the Daihatsu and drove towards Trwyn Du (lit. Black nose). First we had to weave our way through the rather congested town of multiple pronunciations, namely Biwmaris/Beaumaris and then shortly after came upon the aftermath of a traffic accident. Fortunately everything was just about cleared up, so after a substantial wait, the police waved us through.

We possibly got a little lost shortly afterwards as there were lots of little picturesque lanes that didn't go anywhere in particular, but we drove through Llangoed and eventually reached the end of the road at the ruined priory and dovecote. It was possible to drive a little further, but there was a toll and at that time in the afternoon with the light already fading, it wasn't worth paying £2.50 to continue. However, this is a possibility for an excursion next spring/summer when the days are longer.

We were soon back on a larger road -- one that actually had a white line down the middle! -- and we were soon back in Beaumaris/Biwmaris and thence across the Menai Bridge and on to Bangor where we were staying for the night. 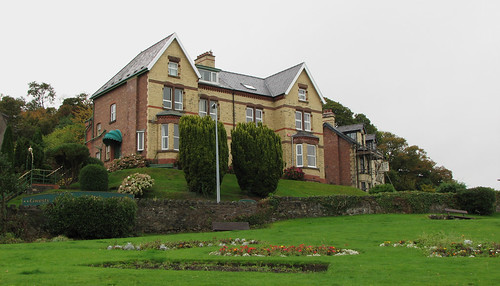 We found a parking space near the pier which was convenient for the hotel and then checked in. We then went on a little walk around Bangor and I failed to buy a new A4 pad of lined paper in W H Smiths. Surprisingly, this particular branch sold only books and no stationery. However, the had no Welsh books so we wandered on a bit further and found a second hand bookshop where G bought a new Welsh novel that looked as though it had never been read.

Then it was back to the hotel to change ready for our meal at the Teras restaurant. Finding the restaurant in the complex of the university buildings was rather like an adventure game (you see a narrow twisty passage...). But we arrived in time for our booking as someone had thoughtfully painted footprints on the floor for hungry restaurant seekers to follow.

The meal was excellent (I had salmon, G had steak) and we got our free bottle of wine, as promised in the special offer that had lured us up to the north of Wales. For desert, we had the "university mess", which was a variation on Eton Mess but with small pieces of Welsh cake included in the cream.

The following morning we checked out after breakfast and I counted the considerable number of steps that led to the part of the hotel where our bedroom was. It turned out to be 36. You'd have thought they could have squeezed in an extra 3. :) Then we drove to the Cineworld at Llandudno. We were a little early for one of the morning showings of the new Bond SPECTRE, so we walked up to the station and stared at trains for a bit. We'd pre-booked but I hadn't been able to use the gift card online, but I did ask about it and the helpful young man scanned it and told me it was still valid, so I'll see if I can use it in the new year.

SPECTRE turned out to be a perfectly decent Bond and after the film we drove home and bought sandwiches for an impromptu picnic in a layby.
Collapse